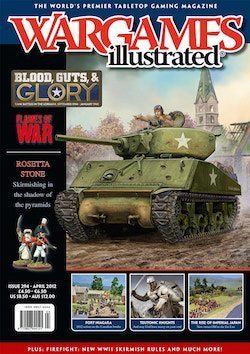 Clash of Steel We celebrate the release of the new Flames Of War supplement, Blood, Guts, & Glory, by picking the brains of four exceptional FOW players, each of whom has a passion for a particular army in Blood, Guts, and Glory. We asked them to write up their favourite list as if they were preparing to take it to a tournament, and we present their thoughts here.   The Rosetta Stone We head off to one of the more exotic locations of the Napoleonic Wars as Steve Dake presents some ideas for skirmish gaming amongst the dark alleyways of Alexandria or the shifting sands of the Egyptian desert in 1800.   Tank Scrap The new Flames of War supplement, Blood, Guts, & Glory drops players into the middle of the action from the tank battles of the Lorraine Campaign of 1944. In this battle report four FOW authors go head-to-head in a massive 3,000-point Tank Scrap.   Great Warriors : Teutonic Knights Our Great Warriors series continues with a look at these crusading knights of the 12th – 15th Century, featuring some wonderful artwork and photos by Fireforge Games.   Matt Parkes : Paints : The Basics This month sees the start of a major new series of articles by multi award-winning painter Matt Parkes. Over the next thirteen issues Matt will be sharing with us the techniques, tricks and tips he has learnt over the years which have made him one of the world’s top miniature figure painters. In this issue we start at the very beginning.   Les Zouaves Anthony Dawson presents the history of these colourful light infantry regiments of the French Army, between 1830 and 1860.   A Normandy firefight Warwick Kinrade, author of a new set of WWII “detailed-skirmish” rules, Normandy Firefi ght, tells us a bit about the game and presents an example scenario.   Designer notes : War and Conquest War & Conquest has finally hit the shelves and wargamers are now arranging their battle lines and preparing for fierce combat in the pre-Renaissance world. We felt it would be a good idea to catch up with author Rob Broom.   “By Fire and Sword” Some wars do not seem to quite fi t into neat wargaming genres and they are often ignored as a result. The War of 1812 is one such example, being neither a true Napoleonic war nor an extension of the American Revolution. Nevertheless, the War of 1812 provides wargamers with many actions suitable for an evening’s entertainment, such as the one described in this article: the storming of Fort Niagara.   Revere the Emperor and Expel the Barbarians
If you are seeing this message after signing in, PLEASE PRESS THE BROWSER REFRESH BUTTON