Victory at Sea: Battle for the Pacific 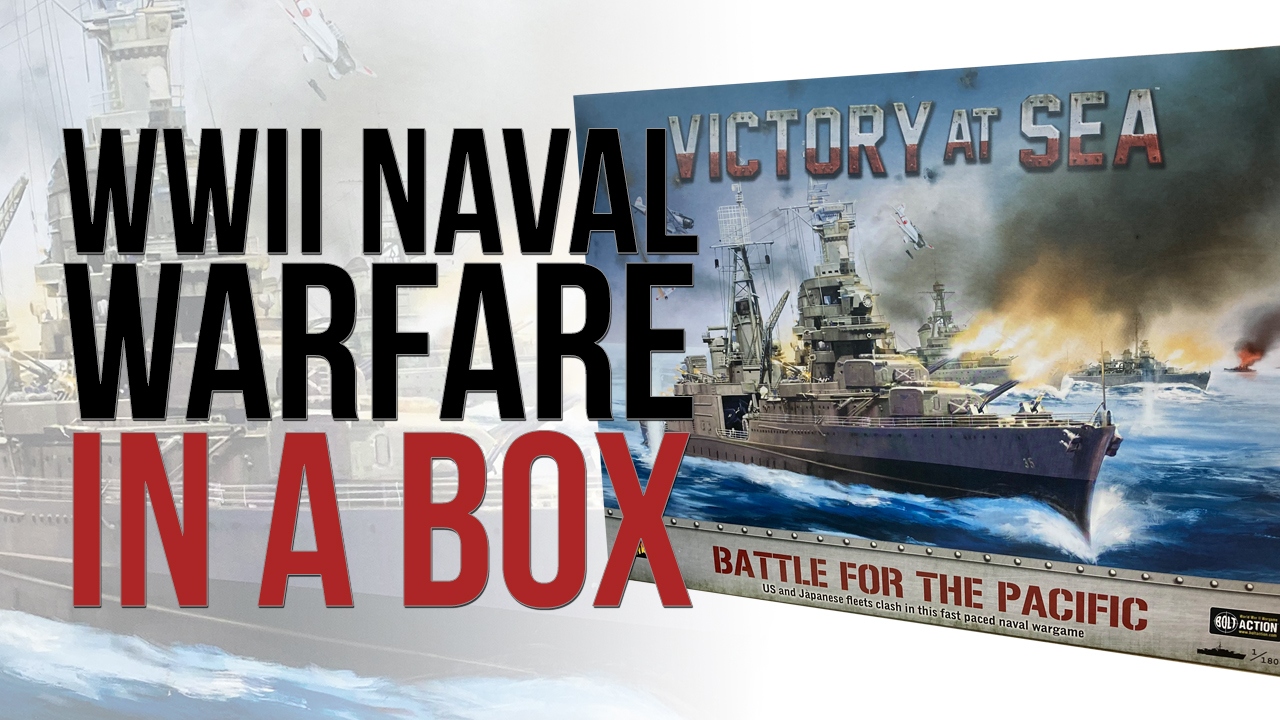 Victory at Sea is the new naval wargame from Warlord Games. Following a tried and tested formula Warlord have released a boxed ‘Starter Set’ which contains everything you need to get going. Victory at Sea: Battle for the Pacific focuses on the World War Two sea war between the US and Japanese fleets. It’s seems likely that other Starter Sets will be released for other theatres.

Let’s lift the robust lid and see what we have inside.

The below is a transcript of the video unboxing, for those who prefer to read than watch.

Lots of bubblewrap to begin with! This wrapping contains 15 resin ships in total.

Pulling out the first pack at random we have both the American and Japanese Destroyers. You will note that the resin ships come cast to their bases with separate guns and masts etc.

These later pieces are made from ‘Warlord Resin’  – that’s the flexible plasticy-resin stuff regularly used by Warlord these days.

Taking a closer look at one of the ships we can see there is some fine detail on this 1:1800 scale ‘Fletcher-class Destroyer’ – including a wake around the vessel.

The size of the bases on all of these models has caused a great deal of discussion on the forums, with some people really being turned off by their chucky nature. However they do paint up really nicely and during a game it is crucial to be able to see the name or class of the ship, so it would be difficult for them to be any smaller and accommodate the name plate.

From the American Fletcher-class we move to the Japanese Fubuki-class Destroyers. Naval experts can study these images and make their own minds up about the detail (I won’t embarrass myself by trying), but any comments below will be gratefully received.

In this next pack we have three Japanese Cruisers. Again with the separate add on bits. On many of these models there will be small amount of knife or file-work to do around the bases – trimming off lugs and flash.

As well as the Mogami-class cruisers we have the Mogami itself, which was the lead of the four Mogami-class ships that fought during World War Two. Later in the war the Mogami was converted into an aircraft carrier. As we can see by the name plate, this model is the ship in its earlier guise.

The last cruiser is a Furutaka-class. These were the first heavy cruisers of the Imperial Japanese Navy, two of these saw action during the war, both being sunk in 1942.

All three vessels have their own guns, bridges and masts.

Here come the three US Cruisers.

First up is the Northampton-class heavy cruiser. One of six Northamptons that built during the late 20s and early 30s.

In the Starter Set we have two Northamptons. Followed by a Portland Class cruiser. If you’re starting to get slightly with regard to what is listed on the box as the content and what we can see here a look at the resin components clears things up.

These are labelled as USS Northampton and Chicago – both of which were Northampton class, and USS Indianapolis which was a Portland class ship.

Moving away from the ship models now and diving back into the box. We have a bag of good quality dice – everything you need for a Victory at Sea starter game.

Then Damage Sliders which are used during the game in conjunction with the Ship Data Cards.

This pack contains the Ship Data cards, obligatory with most Warlord Games box sets, certainly familiar to Black Seas and Cruel Seas players. The other sheet in there is a handy guide with instructions on caring for your resin models.

So these cards contain the stats for your vessels, allowing crucial game information to be readily available during play. This is also where you track ship damage.

The reverse side displays historical information, including details of refits which often changed vessels massively during the course of the war.

The final three items in the box are the Rules Manual, template or Marker Punchboard and two playmats.

The fist and most important thing to say about the Rules manual is that it comes free with the September 2020 issue of Wargames Illustrated magazine. Copies will also be available free, plus P+P, to our Prime members.

We also have articles covering the game rules in Wi391 and Wi392 the July and August issues of the magazine.

These are the Starter Rules, a more in-depth hardback two-volume version will be available at a later date.

And last but not least, assuming you don’t have a sea mat already, are the two thick paper playsheets. These are double sided depending on your preference for dark or light shades of water.

So, back it all goes in the study box – everything you need for your first games of Victory at Sea. This set retails at £50, so that lots of goodies for your cash all up to the usual Warlord  high standard.