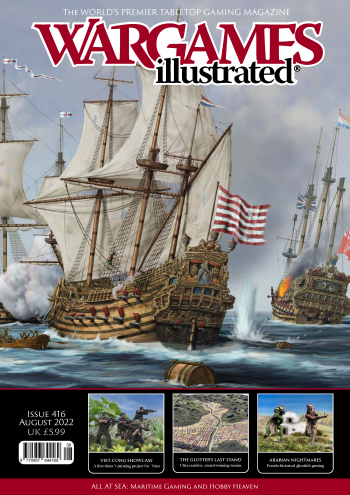 21 in stock (can be backordered)

The ‘best-laid schemes o’ mice an’ men, gang aft agley’, as Rabbie Burns would have said if he had planned to include a free rules supplement in a wargames magazine and then several things conspired against him at the last minute. We planned to include the Thalassa ancient naval battle rules with this issue (as advertised in last month’s magazine), but we were not as ready as we would have liked by the time we had to go to press with this magazine; so please bear with us while we finish fiddling with them, they will appear with a future issue.

Fear not, there is plenty more to enjoy in this month’s All at Sea theme: Barry Hilton’s excellent pitch for wargaming the Anglo-Dutch Wars of the 17th Century, our construction of the MDF Sarissa Ship of the Line, gaming with 18th Century smugglers and excisemen, Civil War Ironclads, and the history of the Spanish Marine Corps. I would also like to point you in the direction of our free-form gaming article on page 78; this is a recent favourite of mine in which Pete Brown makes some suggestions for throwing off the shackles of the rulebook and taking your gaming into left field.

QUICK FIRE!
What have your wargaming peers been up
to recently? Check out their projects here.

RELEASE RADAR
Dom Sore mans the radar receiver and
bring us the latest hobby releases that have
produced a ‘ping’.

THEME:
COME IN, THE WATER IS LOVELY!
In the first of this month’s theme articles,
Barry Hilton presents a compelling case for
naval gaming in the 17th Century.

THEME:
HISTORY OF THE SPANISH MARINE CORPS 1537 – 2017
Miguel Lopez Gonzalez de Leon created 15 ‘moments in history’ dioramas to show the evolution of the Spanish Marine Infantry. He shares this impressive project with us and delves into details of the oldest Marine Infantry in the world.

THE GLOSTER’S LAST STAND – PART ONE
Charles Rowntree tells us how he built his realistically contoured Imjin River board that won the Pete Gill Shield for the Best Participation Game at Partizan, May 2022.

THEME:
MDF TIPS AND TRICKS: 28MM SHIP OF THE LINE
It’s a great looking new MDF kit from Sarissa, but how easy is it to construct? Wi Project Manager James braved the build, tells you how it went, and throws in plenty of MDF building tips along the way.

“HE’S MAKING IT UP AS HE GOES ALONG!”
Tear up the rulebook and bring a free form approach to your wargames? Pete Brown’s crazy enough to try it!

THE TYBURN JIG
As part of this month’s All at Sea theme, it’s Pete Brown again, wargaming with 18th Century smugglers and revenue men.

HOW TO…
BUILD AN ARTHURIAN GATEHOUSE AND RAMPARTS
Paul Davies presents a ‘How to …’ guide for constructing some Arthurian/ Dark Age defences.