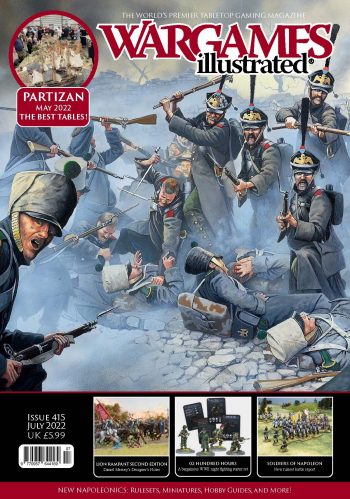 It was great to feel the buzz at the Partizan Wargames Show in Newark, Nottinghamshire recently. So enthused were we by the excitement of the crowds and the quality of the demo games on offer we struggled to contain our report on the show to ten pages, but we did just manage it, with the proviso that there is more to see online – head to wargamesillustrated.net

When we’re not looking at new Napoleonics we have a bumper collection of other new hobby releases in Observation Post for you to peruse; everything from plastic Conquistadors to 6mm World War II vehicles.

So with a spring in our step, let’s leap forward and see “what’s new?”.

OBSERVATION POST
A plethora of 28mm plastics from a variety of periods gets reviewed in this month’s OP along with some 6mm Baccus goodies.

THEME:
New (to) Napoleonics
Neil Smith introduces this month’s theme and provides a whistlestop tour of wargaming’s most colourful period.

Designer’s Notes:
Lion Rampant Second Edition
Daniel Mersey tells us about his ‘Director’s Cut’ of Lion Rampant and the extras that feature in the ruleset’s second edition.

THEME: Rescuing the Russians
Paul Mackay dusts off some classic Hinchliffe Napoleonic Russians he painted
in the 1980s and gives them an update.

Show report: Partizan
A ten-page tour of some of the best games from Partizan, May 2022.

Building a cantina with adobe walls
Tony Harwood recreates the cantina from The Ballad of Buster Scruggs and shows how to make adobe wall effects.