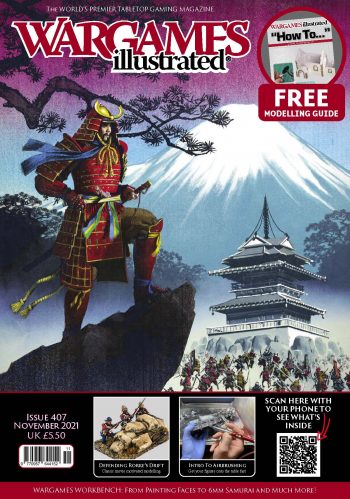 I would like to immediately point you in the direction of page 28 where you will find an article we are particularly proud of; ‘Introduction to Airbrushing’ provides the advice you’ll need to start effectively airbrushing your wargames figures.

My wargaming mentor, Duncan Macfarlane, used to say that painting figures ready for the tabletop is the biggest bottleneck in our hobby. Of course, if putting paint to plastic or metal is the favourite part of your hobby, then it’s not a bottleneck at all; however, if you want to get your toys on the table as soon as possible, then you will no doubt be on the lookout for ways to do that swiftly and easily.

Several advances have been made in easing that painting bottleneck over recent years, e.g. dipping, Contrast paints, and pre-painted models, but we feel the airbrush is still an underused tool when it comes to getting your miniatures battle-ready in double-quick time, and we’re not just talking about model vehicles either; infantry and cavalry figure painting time can be cut down dramatically by the application of an airbrush.

‘Introduction to Airbrushing’ is just one of our Wargames Workbench theme articles for this month, along with several painting and modelling guides covering a wide range of subjects, including Samurai, faces, Persians, and Rorke’s Drift.

QUICK FIRE!
Wargamers from around the world give us insight into their latest hobby projects.

OBSERVATION POST
News and reviews of the latest miniatures and rulebooks.

FULL PAPER JACKET
Neil Smith tried to fill up more of your shelf space with this month’s exciting book releases.

THEME:
INTRODUCTION TO AIRBRUSHING
We kick off this month’s theme of ‘wargames workbench’ with an introductory guide to airbrushing.

RETURN TO PENDAWAR
David Bickley returns to imagi-nations action in the Indian Subcontinent with his Pendawar project.

THEME:
OVERCOMING SCALE AVERSION
Gareth Beamish changes up the scale he’s comfortable with, shrinking down to 6mm Baccus figures, and shares some of the skills he developed.

SILVER BAYONET SOCIETY – PART ONE
The Wi team are getting back to the tabletop with a campaign set in the world of The Silver Bayonet. Follow our adventures or play it out yourself over the coming months!

THEME:
PERFECTLY PAINTED FACES
Callum France shares some expert advice for painting faces that stand up to the closest scrutiny.

THEME:
BUILDING BREEZEHOME – PART TWO
It’s a Callum France double for this month’s theme. He concludes his Breezehome build from the last issue, then finishes with a fine paint job.

CLOCKWORK AND LACE
Pete Brown takes a look at 18th Century fantasy and provides a horror scenario for Broken Legions or your preferred skirmish level wargame.