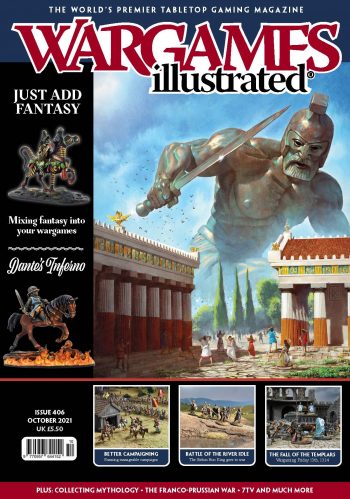 Having been the first to arrive, set up, and subsequently become totally engaged in a game of Death in the Dark Continent, it wasn’t until halfway through the evening that I looked up from my slice of tabletop Africa then around the room to see what the other members of my local wargames club were playing that evening.

Casting a casual eye across the half dozen scattered tables, I spied two games of Dragon Rampant, Gaslands, 7TV: Apocalypse, something I’d never seen before involving ‘spacemen’, and Frostgrave. “Hang on,” says I to the room, “are we the only pair playing a historical wargame over here?”. My question was greeted with a mix of disinterest and nonchalance (i.e., posh disinterest).

It certainly wasn’t the norm for only one in seven games at the club to be of a historical bent, but it also didn’t appear to be a cause for concern, or indeed of any interest at all. In fact, a post-match straw-poll of the gamers taken towards the end of the evening indicated that their hobby crisscrossed between historical, fantasy, and sci-fi without any concern or consideration.

The question of “Is Fantasy just another period?” was first posed in the pages of Wargames Illustrated back in February 1992 and has been debated endlessly ever since. Accompanying that Reader’s Letter, the then editor (and founder) of the magazine, Duncan, included a photo of some fantasy figures along with the caption “Figures painted by John Blanche from the editor’s collection (which includes well over a thousand fantasy figures)”. However, we did then have to wait another six years for a fantasy article to appear in the pages of Wi, in the form of Getting Started with Warhammer Fantasy. Since then, fantasy and sci-fi articles have appeared in the pages of Wi regularly, but always playing second fiddle to historical content. And that’s the way it always will be.

If you haven’t already gathered, all this talk about “fantasy” is a prelude to this month’s theme of Just add Fantasy. It’s the first time we’ve ever had a Fantasy theme in the magazine (although we have come close with Near Future and Post Apocalypse), so it was with both excitement and trepidation that we decided to go with it; but our reason for doing so was – in a satisfying full-circle kind of way – connected with Duncan’s caption on his Reader’s Letter photo back in 1992 ….

Wi has recently inherited and dusted off some fantasy figures painted by the aforementioned John Blanche – Games Workshop’s Art Director and genius behind much of their artistic iconography. We present photos of those figures, seen for the first time in over 40 years, on pages 74 – 77 and accompany that with a few other Fantasy themed articles with which we hope to prove that fantasy really is “just another period”.

QUICK FIRE!
What have your fellow Wargames Illustrated hobbyists been up to recently?

OBSERVATION POST
We take a look at some new releases from Crooked Dice, Gripping Beast, Wargames Atlantic, and Osprey Games.

RELEASE RADAR
Dom Sore highlights some hobby releases that may not have been on your radar.

FULL PAPER JACKET
Our monthly roundup of the best wargames friendly books for your shelves.

THEME:
THE TEMPLARS AND THE DEMON WARS OF 1307-1314
Dr Steve Tibble brings demons and magic to the Templars for our ‘Just Add Fantasy’ theme as well as looking at the real events which led to the Order’s fall.

BLUT UND EISEN – FRANCO-PRUSSIAN WAR RAILWAYS
Bill Gray looks at the railways of the Franco-Prussian war on campaign and on the tabletop.

THEME:
7TV: FANTASY INTERVIEW
Have you heard the one about the game designer, the academic, and the group of students who walk into a pandemic and make a tabletop fantasy game?

BUILDING BREEZEHOME – PART ONE
Callum France takes inspiration from the Elder Scrolls world and makes a stunning terrain piece. Though fantasy themed, the design and techniques in this two-part guide can be easily transferred to all kinds of historical terrain building projects.

THE BATTLE OF THE RIVER IDLE: THE SUTTON HOO KING GOES TO WAR
Daniel Mersey returns, this time providing an excellent opportunity to take the most famous archaeological artefact in England into battle.

THEME:
GOING GREEK – MYTHOLOGY IN YOUR WARGAMING
James Morris is a fan of Greek mythology, and he thinks you should bring some to your tabletop too. Here he presents his top nine reasons why Greek is the way to go in gaming.

BETTER CAMPAIGNING!
Cigar Box Battles’ Cory Ring offers some thoughts on the world of the tabletop campaigns and how to get them right.