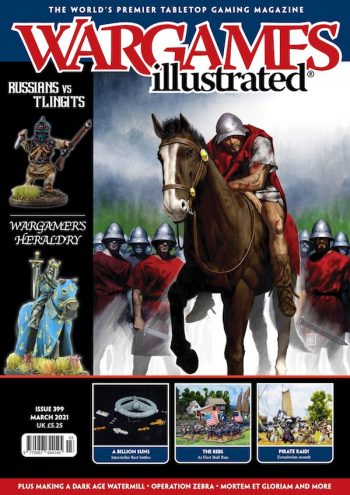 OBSERVATION POST
New product releases in the hobby come under our microscope.

“MORE FRIGHTFUL THAN THE MOST HELLISH DEVILS”
James Morris is keen to tell us about his intriguing wargames project which brings Russian fur traders, their native Alaskan allies and ‘The People of the Tides’ to life.

DESIGNER’S NOTES: A BILLION SUNS
A Billion Suns is a game of interstellar fleet combat from the team behind Gaslands. Designer Mike Hutchinson walks us through some of the interesting design elements of the game and tells us how he arrived at them.

NEW FRANCE UNDER SIEGE
Nick Buxey digs into his collection to create ‘Scenes from La Petite Guerre’ showing New France’s troubles in the North Americas against the Iroquois, who fiercely defended their lands.

HELD TO RANSOM: THE PIRATE RAID ON GUAYAQUIL, 1709
Neil Smith shows us a different side to pirate warfare, away from the high seas and into the mean streets.

ICE STATION STRIPEY HORSE
Pete Brown’s got a lack of space problem that limits his terrain collection. But he’s a man with a plan, a plan to work around this restriction, a plan so cunning you could put a tail on it and call it a Stripey Horse!

STRIPEY HORSE TERRAIN
The atmospheric buildings that decorate the Operation Stripey Horse board (featured in the preceding article) were made by professional modeller Mike Connington. While the game was taking place, we interrogated Mike and got the scoop on his terrain techniques.

ATTACK EVERYTHING!
Nick Buxey provides a great little article about Major Lanoe Hawker who tangled with the famous Red Baron in the skies over Northern France.

THE SIX NATION ISLE CAMPAIGN
MeG designer Simon Hall is no stranger to running campaigns; when the perils of COVID hit he concocted something a little different – a campaign that can be played by gamers in isolation.

A WARGAMER’S GUIDE TO HERALDRY
Freddy Silburn-Slater is our helpful herald, taking us through the designs and stories that adorn the banners, shields and surcoats of medieval and fantasy knights.

FIRST BULL RUN PROJECT: THE REBS
Nick Eyre takes us on a tour of his 28mm American Civil War figure collection based on the battle of First Bull Run – the opening encounter in the war.

HOW TO … MAKE A 28MM DARK AGE WATERMILL
Andrew Pearsall has the details.

COMPANY PROFILE: OFFENSIVE MINIATURES
In our semi-regular feature, Company Profile, Jon Sutherland investigates the figure ranges and manufacturers that you may have missed but can’t afford to ignore.