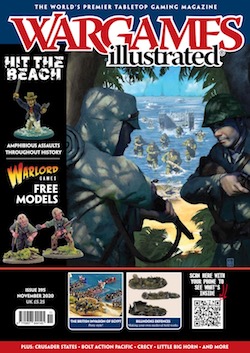 MAGAZINE ONLY – NO FREE FRAME IS INCLUDED

QUICK FIRE!
Our readers ‘take aim and fire’ in posts about their current hobby projects.

OBSERVATION POST
From the Dark Ages to World War III, we look at some recent releases in the wargaming world.

THEME: IN AT THE DEEP END – INTRODUCING ‘HIT THE BEACH’
Regular contributor and amphibious enthusiast Pete Brown introduces this month’s ‘Hit the Beach’ theme, taking a deep dive into the ocean of wargaming possibilities.

THEME: INVASION SUSSEX!
Games Designer Dan Mersey introduces
us to some early Saxon battles that begin with beach-hitting action on the south coast of England.

THEME: WHAT A CORKER! MARLBOROUGH’S IRISH INVASION, 1690
Barry Hilton provides the words and (glorious!) pictures for this ‘Hit the Beach’ article in which John Churchill, 1st Duke of Marlborough leads his forces into Ireland.

WARGAMING CRÉCY
Simon Macdowall tackles one of the most famous battles of the Hundred Years War and throws in a bit of Billhooks and Zoom along the way.

THEME: THE BRITISH INVASION OF EGYPT, 1801
The beach landing at Abu Qir Bay led to the defeat of the French in Egypt – a not widely known action within the Napoleonic period. That relative obscurity didn’t stop Alan Perry from designing an entire range.

HOW TO … BUILD AN AFGHAN GATEHOUSE AND WALL
Paul Davies builds a gateway and walls which could be used as the starting point for a fort or even a walled town or city. The Kabuli Gate at Fort Rohtas in the Pakistani province of Punjab provided his inspiration.

FREE FRAMES ‘HIT THE BEACH’
Taking inspiration from this month’s free US Marines frame, along with Neil Roberts’s ‘Hit the Beach’ cover art, James has created a set of models landing in the Pacific.

HOW TO … BUILD AN IRISH ROUND TOWER
Turn a Pringles tube into a model of an Irish Round Tower! Glenn Clarke shows us how.

THEME: HIT THE BEACH (MAT)
If you want your wargames figures to go hitting the beach, you are going to need some beach to hit – we look at the ready-made options available.

LITTLE BIG HORN – FROM BOARD TO BATTLEMAT
John Hart takes a trip down Memory Lane, turning a much-loved childhood board game into a retro wargame.]