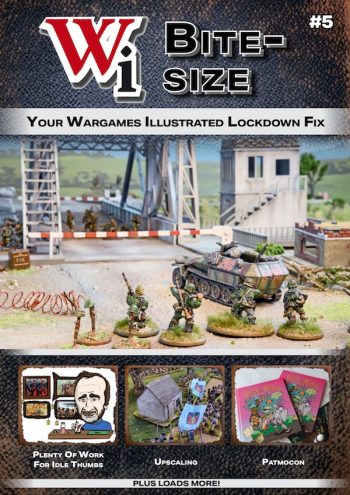 Welcome back to Wi Bite-Size – this is the fifth of our mini PDF magazines aimed at keeping our subscribers well-fed with wargaming reading material during the lockdown – whilst the print magazine is mothballed.

WiPrint and WiPrime Members can purchase this issue for free by signing into their account. If you are a print subscriber who DID NOT subscribe through our website please read this for more information on how to access Bite-Size.

BITE-SIZE BANTER
The Lockdown around the globe seems to be easing, but we’re still quite a way from being back to our ‘old normal’ wargaming activities, so we’re back with another week’s worth of what your fellow wargamers have been getting up to on their painting desks, wargames tables and computer screens.

PATMOCON
As wargames conventions around the world were being cancelled or rescheduled to avoid the pandemic, the bright sparks at Paint all the Minis (PatM) decided to take to the virtual space to hold a gaming and modelling show via attendees’ computer screens. Peter Brown of PatM takes up the story.

UPSCALING
Slightly fatigued by so much figure painting, David Bickley turned to his bits box for inspiration and came up with the idea of upscaling some buildings for his North American battlefield settings.

WARGAMES SPACES: THE BARRACK-ROOM PROJECT
Kent wargamer Michael Carson relates his tale of an adventure in wargaming infrastructure which resulted in the creation of his own slice of hobby heaven.

HISTORICON PAINTING COMPETITION 2019
We take a trip back in time to last year’s Historicon and view some of the best (and previously unseen) entires from the Wi/HMGS Painting Competition.

THE WARGAMES WIDOW MAKES: HILLS (AND CARPETS)
The Wargames Widow returns to show us how to transform a carpet into a hill.

CARRY ON UP THE DANUBE
We’ve been digging around in The Vault looking for articles in connection with wargaming on TV, there are several, and we thought we would pull this one from the archive as an interesting instance of our hobby on the small screen.

“THE TURKS ARE COMING”
Over the last few weeks, we have been fuelling the Wargames Illustrated YouTube Channel with videos that were originally exclusively included with Wi Interactive. To accompany a video we recently uploaded filmed at The Wargames Bunker, here’s the corresponding article about the Barbary Pirate raids on England in the 17th Century.

AN INTERVIEW WITH BRYAN ANSELL
In December 2012 Wi Editor Dan had the opportunity to interview Citadel Miniatures founder Bryan Ansell about the resurgence of his other figure manufacturing company Foundry, plus lots more besides. We’re giving the resulting article a fresh airing in the hope that it will be of interest to those who missed it the first time around.

PEGASUS BRIDGE
Another video we unearthed from the Wi Interactive back catalogue this week was an interview with Rick Priestley and Alessio Cavatore about a game of Bolt Action we had played using the Warlord Games Pegasus Bridge set. In this accompanying article, the two Games Designers take us through the story of the refight.