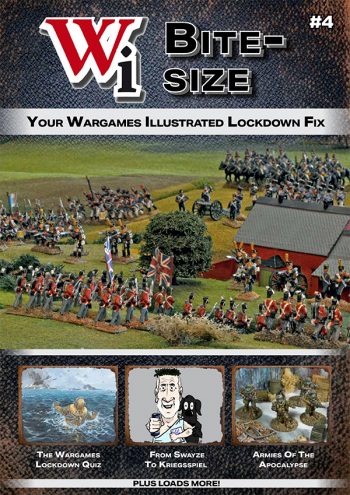 Welcome back to Wi Bite-Size – this is the fourth of our mini PDF magazines aimed at keeping our subscribers well-fed with wargaming reading material during the lockdown – whilst the print magazine is mothballed.

WiPrint and WiPrime Members can purchase this issue for free by signing into their account. If you are a WiPrint subscriber who did not subscribe through our website please read this for more information on how to access Wi Bite-Size.

BITE-SIZE BANTER
We’re back with more of your lockdown observations, tips, projects and general Bite-size banter. Let’s take a look at what your fellow wargamers have been up to over the last week…

WARGAMING IN THE TIME OF CORONAVIRUS
For this week’s WittoC we are joined by Rich Clarke of Too Fat Lardies fame. He tells us about his appreciation for the work of Patrick Swayze and how he’s embraced tech to itch his wargaming scratch

NOT APPEARING AT SALUTE 2020
Simon Stokes of the Naval Wargames Society tells us about their planned Salute 2020 game, which was designed to see SAGA taking to the waves.

BEFORE ROGERS: THE FIRST TRUE RANGER, BENJAMIN CHURCH
Nick Buxey traces the history of New England patriot Benjamin Church, before providing us with suggestions for wargaming and modelling Church and his pre-Rogers Rangers.

MAKING A MEDIEVAL TRACTION TREBUCHET
Now here’s a modelling project that will keep you busy! Alan Easton has a really impressive collection of hand-made medieval trebuchets so we asked him to show us how he made them.

ARMIES OF THE APOCALYPSE
Paul Leach provides some ideas for building Apocalypse armies and some suggested places to go for rules and figures.

THE WARGAMES LOCKDOWN QUIZ
Have you taken part in a Wargames quiz? We’re guessing not. So, not to be outdone by all the other Lockdown quizzes doing the rounds at the moment, here is the WI Wargames Lockdown Quiz.

THE WARGAMES WIDOW MAKES: AN ADOBE FORT
10 The Wargames Widow returns, showing us how she constructed a multi-functional, multi-period Adobe Fort for her ‘wargamer’ (aka husband).

HOW WARGAMING SOLVED SOME HISTORICAL MYSTERIES FROM THE BATTLE OF WATERLOO
In June 2011 we paid a visit to Barry van Danzig’s wargames room. Barry had just published a book on 16 his take on the Battle of Waterloo and he had used his massive Waterloo wargames table to reinterpreted the battle. In this article, Barry presents some of his findings and we take a tour of (and walk on!) his table.

THE BLOODY BORDERS
We’ve pulled this article from the April 2005 issue of WI. It introduces readers to the 16th Century Borders Reivers and forms the first (but stand-alone) part of a series of articles we ran on the subject.

TOURING THE LONE PINE TABLE
For Salute 2011 Wargames Illustrated commissioned ace model maker Dave Bobley of Grand Manner to construct an (award-winning!) table based on the Lone Pine section of the Gallipoli battlefield. In this article, originally published in June of that year, Dave takes us on a tour of the model.