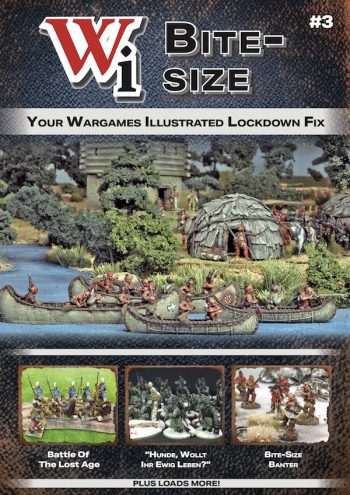 Welcome back to Wi Bite-Size – this is the third of our mini PDF magazines aimed at keeping our subscribers well-fed with wargaming reading material during the lockdown – whilst the print magazine is mothballed.

WiPrint and WiPrime Members can purchase this issue for free by signing into their account. If you are a WiPrint subscriber who did not subscribe through our website please read this for more information on how to access Bite-Size.

BITE-SIZE BANTER
We’re back with more of your lockdown observations, tips, projects and general Bite-size banter. Let’s take a look at what your fellow wargamers have been up to over the last week…

WARGAMING IN THE TIME OF CORONAVIRUS
In this episode of WittoC, we hear from author and gaming grandee Rick Priestley.

NOT APPEARING AT SALUTE 2020
Surely this game, the work of Michael Awdry and James Walters, would have been a contender for ‘Best Game’ at Salute 2020! Hopefully, it will still be in contention come Salute 2021. Michael provides the background info to this massive miniature construction project and he and James have also provided the photos of the game for you to feast your eyes on.

BATTLES OF THE LOST AGE
Oathmark author Joseph A. McCullough joined us at WIHQ (pre-lockdown!) for a game of tabletop high fantasy. His report provides a great introduction to the mechanics of the game.

PROJECT SHOWCASE: “HUNDE, WOLLT IHR EWIG LEBEN?”
Having seen the work of Jürgen Horn via an email shared by a friend of a friend, we contacted this talented German painter/modeller and asked him to tell us about the force he is putting together from the Bolt Action Stalingrad book.

“A MERE MATTER OF MARCHING!” OR IF YOU PREFER, THE WAR OF 1812-15
David Bickley introduces us to the War of 1812 via his expanding collection of figures for this colourful ‘Napoleonic’ conflict.

EN ARMÉ AV SPÖKEN (AN ARMY OF GHOSTS)
Barry Hilton takes a look at an army of Swedes who dwindled away to nothing as a result of hard campaigning and offers a scenario for his Donnybrook rules to represent the homeward trek.

THE WARGAMES WIDOW MAKES: TRACK & STREAM BABBLING BROOK
The Widow returns. This week ’The Wargamer’ had requested “a swift-flowing mountain stream running alongside a rutted track”. Here’s how she made it….

THE FLOATING HULK
Joe McCullough provides a solo scenario for use with his Frostgrave: Ghost Archipelago rules.

THE BRITISH IN THE SUDAN, 1883-85
We like a good uniform guide here at Wargames Illustrated and dipping into the archive, back to April 2005, we’ve plucked this one out by a certain Michael Perry for the British in the Sudan, 1883 – 85.

THE GASKIN COLLECTION: THE AMERICAN REVOLUTION
Over the years we have photographed Bill Gaskin’s figure collection numerous times. Regular readers may remember that back in May 2019 we brought you eight pages of stunning Napoleonic and Seven Years War 26 photos in the magazine. Prior to that, in May 2013, we were invited down to Bills place to take pictures of his AWI figures and terrain. Despite filling another eight pages with great pics we had lots leftover that never saw the light of day, until now. Sit back and enjoy (part of!) one of the finest figure collections we have ever photographed for the magazine.

S.C.R.U.D.
Here’s a short article from January 1993 in which visual aesthetics make way for a very interesting ‘off tabletop’ combat resolution system.