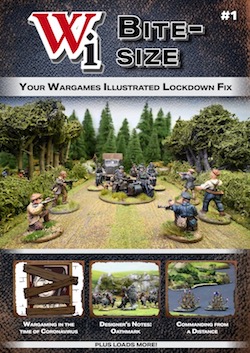 Welcome to the first issue of Wargames Illustrated Bite-Size. For the next few weeks, Wi Bite-Size is going to be your Friday fix of Wargames reading.

WiPrint and WiPrime Members can purchase this issue for free by signing into their account. If you are a print subscriber who did not subscribe through our website please read this for more information on how to access Bite-Size.

BITE-SIZE BANTER
We asked our readers to tell us what wargaming activities they were getting up to whilst in lockdown. This is what you told us…

WARGAMING IN THE TIME OF CORONAVIRUS
During the imposed lockdown of the wargames industry, we thought it would be interesting to find out how various luminaries, personalities and big cheeses in the hobby are filling their time. WI Bite-size will feature a ‘Wargaming in the time of Coronavirus’ (WittoC) column once a week until we have seen off this bug and are able to get back to the sociable side of our hobby. We begin WittoC by hearing from Warlord Games CEO John Stallard.

NOT APPEARING AT SALUTE 2020
Following the cancellation of Salute 2020, Wargames Illustrated put out a call to all clubs, groups and traders who were planning demo and participation games for the show. We asked if they would like to ‘display’ their tables in our ‘not-appearing at Salute’ feature. Stalingrad: Fire on the Volga is our first offering, courtesy of The Loughton Strike Force.

WARGAMES ILLUSTRATED PAINTING COMPETITION. HAMMERHEAD 2020
This year’s WI Painting Competition held at Hammerhead in Newark took place against the foreboding backdrop of the impending shutdown of all public events in the UK. So it was hardly surprising that entries were a little down on last year, but that certainly wasn’t reflective of the quality which continues to increase with every passing year. See for yourself!

MEET THE RESISTANCE
Following on from the theme of the April magazine, Neil Smith explores the role of the resistance, those eager spies and noble assassins who fought against occupation by Germany during the dark days of World War Two.

THE WARGAMES WIDOW MAKES: A HIGHLAND CROFT AND ENCLOSURE
The first in the new ‘Tales of a Wargames Widow’ series delves into the creation of a typical ‘croft’ or cottage to be found in the Highlands of Scotland.

The recent enforced closure of wargames clubs around the world and social distancing measures, in general, have seen a surge in solo wargaming. If you are thinking of giving
it a go or are looking for more ideas, in this article, first published way back in WI45, Mark Elwen shares some solo gaming ideas for Colonial-era games.

4 COMMANDING FROM A DISTANCE
Those of us who wargame in the 17th Century will be familiar with Barry Hilton, aka The League of Augsburg, as an advocate of all things Lace Wars on terra firma; but his attentions have recently drifted out to sea as he runs an Anglo-Dutch Wars naval campaign. Barry tells us how he pieced together the campaign in which all the players are several hundred miles apart.

GET JOUSTING!
Peter Dennis offers us some free Paperboy knights and instructions for a spot of tabletop jousting.

ON THE BOOKSHELF
Neil Smith brings us a weekly slice of book previews and 14 reviews, with a focus on what will appeal to the wargamer.

THE FALL OF THE FOURTEENTH
With another lockdown busting suggestion, Chris Hahn provides us with his take on a solo wargaming 20 classic – the ambush of the three Roman legions in the Teutoburg Forest.

This set of rules for the American Revolution is the only article ever to be printed twice in Wargames Illustrated magazine and although they are now more than 30 years old (first published in WI1), you can’t keep a good set of rules down, so here they are again for your deliberation and consideration.

31 WAR IN THE WILDERNESS
With the recent release of Muskets and Tomahawks, we thought it would be worth revisiting an article from WI302 in which Neil Smith and Chris Peers introduce us to the history and guide us through the practical information required for bringing a French and Indian Wars force to bear on the tabletop.