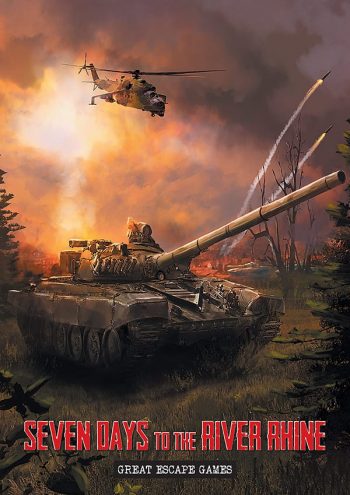 Seven Days to the River Rhine

This product can only be purchased by Prime members. To purchase this product, sign up by purchasing a Prime membership, or log in if you are a member.
Share
Categories : Specials

Seven Days to the River Rhine is a set of fast-play rules simulating armoured combat during the 1980s in Europe when the Cold War between the NATO alliance and Soviet-led Warsaw Pact could easily have turned Hot.

The rules cater for games with lots of armour and infantry and other supporting weapons on any scale. The mechanics are remarkably simple and the method of activation presents players with tricky tactical decisions to ponder creating a sense of high tension and drama. It is a game especially suited to large,multi-player games in which each side has one player acting as the overall commander for the battle, developing and coordinating an overall plan for the achievement of operational objectives, and entrusting individual players to execute those plans.

It is a game in which simplicity is the ultimate sophistication. The rules are deliberately uncomplicated to allow players to concentrate on the scale of the battle, but the action/reaction system ensures that all players are constantly involved at all times making tactical decisions affecting their own commands.