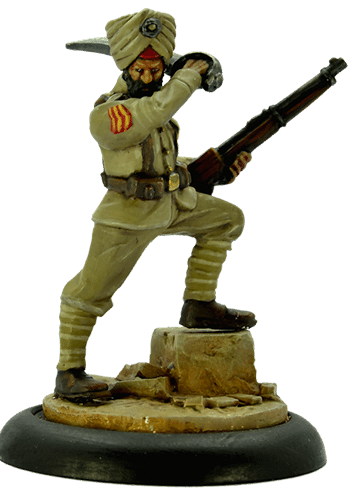 “Beneath Saragarhi’s ruined walls, They found a fitting grave; For Saragarhi bears the fame, They gave their lives to save.”

From Khalsa Bahadur, an epic poem written by Chuhar Singh

The Battle of Saragarhi is known as one of the greatest last stands in military history. On 12 September 1897, 21 Sikh soldiers of the 36th battalion of the Sikh regiment of the British Army, led by Havildar Ishar Singh, fought to their death against an army of over ten thousand marauding Orakzai and Afridi tribesmen. Although they were offered safe passage, they fought to delay any attacks on other forts in the area. All of the soldiers were decorated with the highest military honour available, The Indian Order of Merit.

Click below to view Havildar Ishar Singh in 360 degrees!

< >
CHRISTMAS AND NEW YEAR CLOSURE:
The Wargames Illustrated shop is open for business 24/7 over Christmas and New Year BUT between Thursday 24 December and Monday 4 January we will not be in the office, so no orders will be dispatched and no customer services enquiries will be answered during that time. We will get onto them as soon as we are back. Have a Merry Christmas!
Loading Comments...