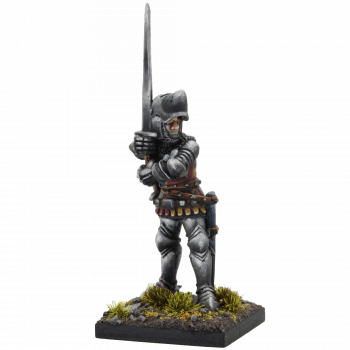 The eldest son of Henry Percy, 1st Earl of Northumberland, young Harry (Henry) received a knighthood from King Edward III at the tender age of twelve. It was whilst fighting for King Edward against the Scots in 1385 that Harry earned the nickname ‘Hatspore’ (Hotspur) from his adversaries – alluding to the terrific speed at which he conducted his campaigns in the north. Turning from King Edward in favour of the upstart Henry Bolingbroke in 1399, Hotspur was given lands and titles after Bolingbroke was crowned King later that year. However, the Percys grew increasingly discontent with the new King and at the Battle of Shrewsbury in 1403 fought in rebellion against him. However, the battle was to prove a fatal error of judgment, and Harry Hotspur lost his life during the defeat of his army.

View Harry Hotspur in 360 degrees below:

Still not sold on Harry? Well, the video below shows him in video format on our YouTube channel, before Callum demonstrates how you can paint excellent plate armour: