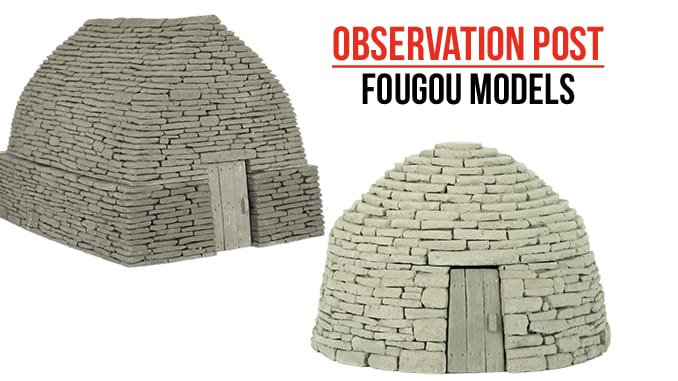 Fougou Models produce a variety of resin buildings and other items, mostly focused upon the Dark Ages and Modern or Post Apocalyptic Shanty Towns.

The items sent for review include this Dark Age Oratory Church, based upon the Oratory churches of the Celtic world but could work equally well in a fantasy or even a spaceborne Pulp setting.

There are three pieces in total, a base, arched roof and a wooden door. The main parts are ‘textured’ with an overlapping stone effect, which is pronounced enough to encourage paint washes and / or dry brushing. The building is hollow, and the roof may be removed, allowing for some placement of miniatures and similar items inside.

The second piece is a small Beehive Hut, again available in three pieces. The stone effect here is equally irregular but laid out in a circular style. Again, the roof lifts off and some figures can be placed within.

The shanty town-style buildings are in three sizes, with others available from the company. Each is roughly similar, a rectangular structure with the appearance of being constructed largely from corrugated iron but with wooden looking and some stone parts. They are very ramshackle looking buildings, held together with nails and screws. Two of the buildings have removable roofs and all of them also have textured walls inside. The building without a removable roof has a separate door, plus it has ‘mod cons’ including a propane tank and an air conditioning unit. These buildings could work as modern African or South American buildings, or could feature in a post apocalyptic settlement.

These are sturdy, well-cast resin pieces, with plenty of texture for the use of different painting effects. As mentioned, there are a number of other items available from the company, including some scenic terrain pieces such as oil drums, barricades and similar. Its worth taking a look to discover more about this small company and their products.