Death In The Dark Continent 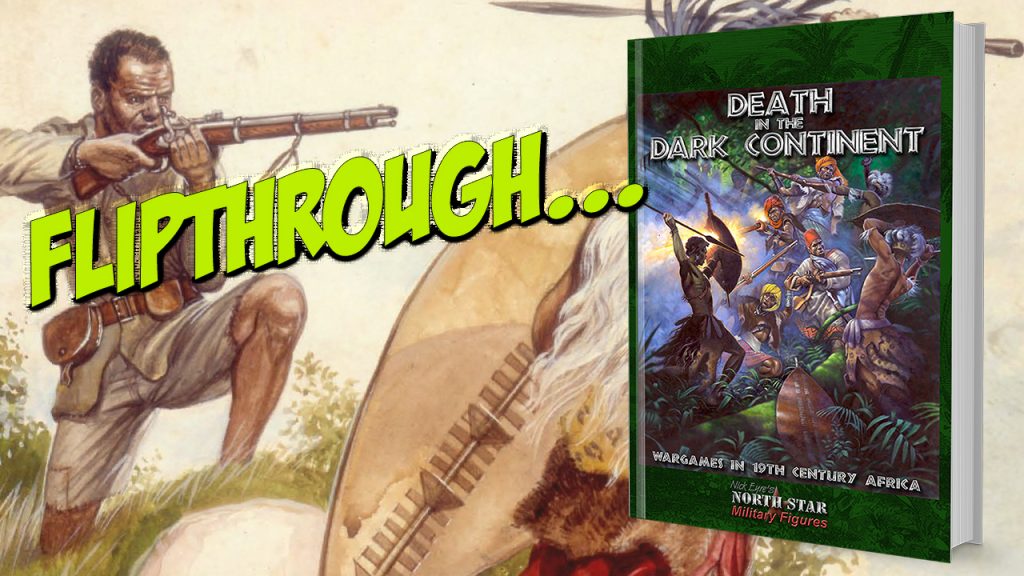 The new, hardback edition of Death In the Dark Continent is finally out, complete with the main rules, army lists and even a bonus set of rules for big game hunting. These rules for warfare in 19th Century Africa may be the same as the original, published in 2009, but the extras make this release quite different.

First of all, for those who own the original book, the rules haven’t fundamentally changed, they’ve just been re-organized and all the supplementary material has been collated into this one volume. You now get a contents page and an index, with every page containing detailed explanations, examples and photographs of painted miniatures.

The main rules are actually fairly short, covering all the standard aspects found in the majority of rulesets – Movement, Shooting, Close Combat, Morale, etc. There are also rules for different terrain features, plus several scenarios with special rules, and a set of optional rules regarding Stratagems and Psychological Warfare.

The game requires somewhere between 40 and 80 figures per side depending on weather you are playing Colonial or Tribal forces, and figures are multi based on stands of two or three.

You could consider Death in the Dark Continent to be either large scale skirmish or small scale battles, the rules being non-specific about how many men are represented by a model.

In general the rules are easy to learn and access, with a detailed playsheet at the back of the book for quick reference.

There are 80 Army Lists included in the book, covering every part of Africa and focusing in on the vast number of tribal peoples who inhabited this diverse continent. The lists also cover the Invaders; the colonial powers who came to Africa to dominate. The lists are followed by a history of the Scramble for Africa which has facsimiles of contemporary maps and a very useful map on page 151 showing the relative positions of the various tribes during the period. The lists, historical information and maps make it easy to create realistic encounters between tribes and invaders, plus lift the book from just a set of rules to a valuable resource for both veteran and new colonial wargamers.

Considering these rules started out as a slim, paperback volume written in a pretty chaotic style, the current edition is so much more. All aspects of game related information has been included, from how to base your miniatures, to some of the easiest to use army lists you will find. Yet this edition doesn’t stop there, as the level of historical information, maps and more are perfect for reference or giving you ideas on how, why and what you should field as your army.

This is a great set of deceptively simple rules that simulates the African style of combat, with a wealth of well set out historical information wrapped around it and all lavishly illustrated with Osprey plates, copious photographs of miniatures and artwork.

You can find out much more about DitDC in the June issue of Wargames Illustrated, which takes the theme of wargaming in the Dark Continent.