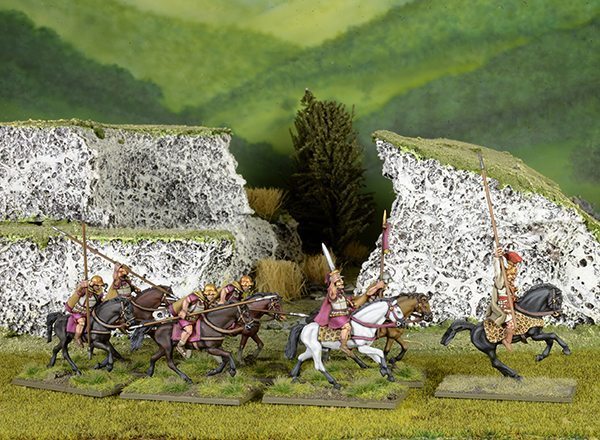 The current issue of Wargames Illustrated takes the theme of ‘Alexander the Great – God of War’ and features four article on this famous heavy-weight of ancient history. This issue is sold out via our website, but you still have a few days to pick up a copy via WH Smith in the UK, or (worldwide) from your local hobby store. Alternatively, go to the Apple, Amazon or Google App Store to download a digitally interactive version.

To complement our Alexander issue we present below a further article; on Alexander’s companions.

They were the best of the best, the elite of the Macedonian Army, friends to the King, and appointed for life: they were the Companions. This small but heavily armed cavalry unit generated fear out of all proportion to their numbers in whoever faced them, and they were the sharp, steel tip of Alexander’s offensive tactics in victory after victory. So effective were they that no army in the east after Alexander could campaign without a similar force at their disposal.

Alexander and his Companions

Like almost all of Alexander’s army, he inherited the Companions from his father Philip II of Macedon (359BC-336BC). The Unit was probably first formed from Philip’s closest Macedonian nobles, though commoners and even barbarians would be recruited as the unit grew in size and became an essential component of the army. Only the nobility would have the funds to equip themselves in the desired manner, but Philip may also have been keeping the nobles with him as he set off on his campaigns rather than have kicking their heels back home and plotting against him. Moreover, the Companions provided a pool of loyal officer candidates to command the disparate elements of the Macedonian army. When Alexander (356BC-323BC) inherited the kingdom he kept the Companions and with them at his side he would carve out the largest Empire yet seen in the western hemisphere.

The Companion was heavily armed, wearing a bronze, contoured cuirass, shoulder guards, and a Boeotian helmet. He did not carry a shield, but wielded a long, straight-bladed sword and a shorter, curved blade for close-quarters fighting. He also probably carried a javelin or two for throwing at the enemy before engaging. A heavy cloak worn clasped at the neck would complete the ensemble. His equipment was the best money could buy and it was only fitting that he would have his pick of the best horses available, though it must be remembered that the evolution of the warhorse was still in its infancy and they were not yet the strapping warhorses we see in the movies. Moreover, the Companion did not have the use of stirrups or any of the other accoutrements of latter day cavalry.

The Companions began life as a small unit of 8 squadrons (ilai) of around 200 men each. Each squadron came from Macedonian or captured territory while the King personally commanded and led the Royal squadron. Collectively, the other Companions formed a hipparchy commanded by a hipparch. With territorial expansion came increased recruitment from captured territories until the Companions numbered around 2,500. After Alexander died prematurely his Successors broke up his Empire, but they retained the Companions, making them into even heavier cavalry but with different unit designations. The evolution of the Companions continued into the eastern Roman Empire, which in turn became the Byzantine Empire.

Alexander developed Hammer and Anvil tactics to win his battles. The Companions formed the hammer, the impenetrable phalanx became the anvil. The idea was that the Companions would form a wedge and when the phalanx was in a position to apply pressure along the front of the enemy, the Companions, usually deployed on the Macedonian right flank, would launch themselves at the enemy flank, invariably crumpling it and exposing the flank and rear of the enemy phalanx. Few armies could stand up to such aggression, particularly the massive but unwieldy Persian hosts that Alexander defeated in three major engagements.

Battle of the Granicus River (334BC)

Alexander at the Granicus River

On 3 May 334BC, Alexander led the attack of the Macedonian army against a surprised Persian army that was not quite expecting the sudden onrush. Taking personal command of the Macedonian right flank, Alexander displayed masterly command and control of his cavalry. He took them across the river in the face of the enemy and charged, some say recklessly, into the stunned Persians. Such was the ferocity of the attack, Alexander broke his spear and had to be rescued by his fellow Companions.

The famous ‘only image’ of Alexander, possibly showing him at Issus

At the Battle of Issus in November 333BC, the Persians may have expected Alexander to attack from his left flank while his right seemed protected by the adjacent Gulf of Issus. Yet again Alexander confounded expectations by launching his attack against the Persian left and annihilating them before turning inwards to fight the crumbling Persian centre.

The Battle of Arbela, shown in a ‘modern’ painting

When Alexander reached Arbela and found Darius II waiting for him with an army of hundreds of thousands, it was clear this would be the decisive battle for Persia. The Persians attempted a double envelopment that nearly paid off, but Alexander again drove his Companions forward this time into the left-centre of the Persian horde, cutting their jugular, and causing the Persian army to collapse. If he had not returned to bail out his beleaguered general Parmenio, the war would have been over there and then, but as it was Alexander had to continue his campaign into the Persian hinterlands and beyond.