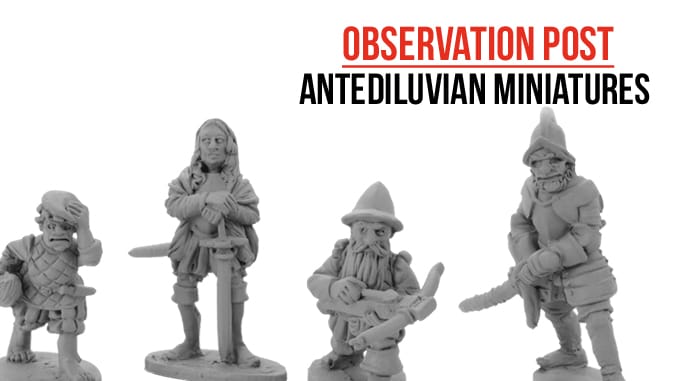 Antediluvian Miniatures continue to release some eclectic miniatures, ideal for any fantasy roleplaying or skirmish wargames, especially those in a Lost World setting, in particular FrostGrave: Ghost Archipelago.

In the fantasy explorers fantasy explorers with a Renaissance / Conquistador theme, we have the wizard Leonardo’s enigmatic female companion, a dwarf marksman with crossbow and a halfling thief with a stolen idol, plus a warrior with a rather vicious looking double-handed sword! All the miniatures in this particular range are fantastically sculpted by Paul Hicks. The wizard ‘Leonardo’ and apprentice, and a menacing and slightly deranged captain (plagued by monkeys) are also in the range.

Other releases suitable for Lost World adventures are this ferocious Permian predator, the Gorgonopsid Inostrancevia, the characterful signage which would decorate any table and the gross looking giant tick which could drain a man in a few moments!

Antediluvian Miniatures has a number of figures for suitable for fantasy and late 19th / early 20th century set Lost World adventures, plus a burgeoning range of historical miniatures that are excellent. Another great little company that’s thinking big and daring to be different.