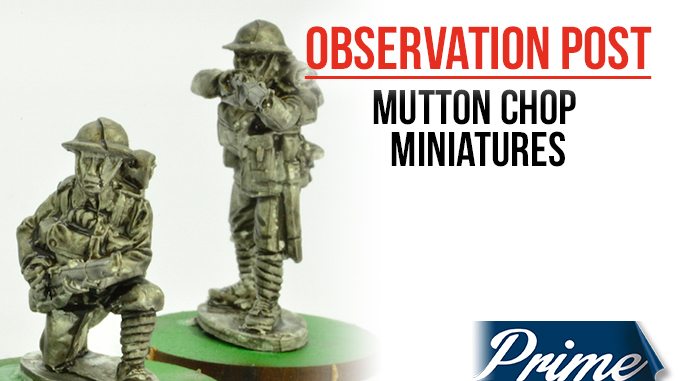 It has brought to our attention that some of the figures in this review may be below the usual standard. The other castings have now been checked and we are assured that gamers may buy with confidence in future.

Mutton Chop Miniatures, created by sculptor extraordinaire Paul Hicks, have decided to go for something a little different. The initial four packs in this new range depict British Infantry of the 1930’s in the ‘Service Dress’ uniforms worn by the Army up until late 1939 / early 1940. With their full length tunics, ’37 pattern webbing equipment and puttees, these will serve for Palestine up until the BEF in France in 1939, plus could depict forces during the VBCW or resisting the invaders during Operation Sealion.

There are four packs in total, a Section Command consisting of a Corporal, Lance Corporal and a Lewis Gun, two Infantry Sections and a Vickers Heavy Machine Gun team.

The weapons depicted on the miniatures are Lee Enfield Mark III rifles and as noted above.

All the miniatures are excellently sculpted and many of them are in a variety of ‘action’ poses. There is Command HQ, Support including a 3” mortar and further Infantry Squad packs on the way, with more choices planned. They are currently available from Empress Miniatures, who also offer a selection of vehicles from the 1930’s that could compliment them.