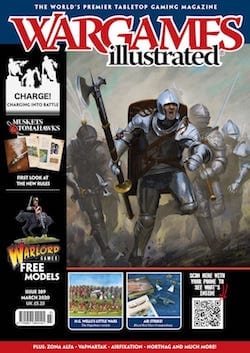 It’s time we paid tribute to that staple of the wargame – the charge. Whether on foot in command of 15,000 Confederates trying to finally get to those damn Yankees, or riding to glory with the Scots Greys whilst re-fighting Waterloo, the charge is often the watershed moment in both real and miniature battles. In this issue of WI we celebrate the charge with theme articles that look at historical, Hollywood and tabletop charges. The French and Indian War is set to receive a welcome revival right about now, thanks to the recent release of Musket and Tomahawks II from the Studio Tomahawk stable who have a habit of injecting fresh life into periods that are already popular. We take a first look at the rules and tell you what you need to know. A couple of Games Designers also join us this month to fill you in on their new publications. That’ll be Warwick Kinrade with his Cold War Gone Hot Northag game and Andy Chambers with Air Strike! – the new supplement for World War Two air combat game Blood Red Skies. We’ve also got news of a new World War One skirmish game Blood and Valor, from the makers of hit pirate rules Blood and Plunder. There’s plenty more to whet your wargaming whistle including War of the Triple Alliance model making, a new range of medieval figures, John Stallard’s Airfix collection, Zona Alfa, Paperboys – the list goes on! Dan Faulconbridge, Editor and Owner. OBSERVATION POST A look at what’s new in the hobby. THEME: TROT, GALLOP, CHARGE! Sub-Editor Wayne takes a look at British cavalry charges through history and comes up with some ideas on how to emulate or avoid the results on the tabletop. CAPTURE THE EAGLE! Thoughts on using this month’s freebie frames in skirmish actions inspired by the Household Cavalry and Union Brigade. THEME: THE CHARGE THAT CHANGED ENGLISH HISTORY Simon MacDowall shares new evidence surrounding one of the most famous battles and charges in English history. MUSKETS & TOMAHAWKS II We examine the key rules changes and new options in M&TII. THEME: MYTH OF THE CHARGE Bill Gray explores the reality of the charge and how this translates to the tabletop. PAINTING THE ROYAL HORSE GUARDS Pete (The Wargamer) Harrison provides a guide to painting one of this month’s freebie figure frames. THEME: HOLLYWOOD AT THE CHARGE! Sub-Editor Wayne presents his Top Ten historical charges which have been given the Hollywood treatment. CREATING ZONA ALFA RECRUITS Zona Alfa author Patrick Todoroff puts together suitable recruits and reinforcements for his own adventures in The Zone. INSIDER INTERVIEW: AIR STRIKE! We interview Andy Chambers about this new Blood Red Skies compendium. FIGURE SPOTLIGHT:
If you are seeing this message after signing in, PLEASE PRESS THE BROWSER REFRESH BUTTON