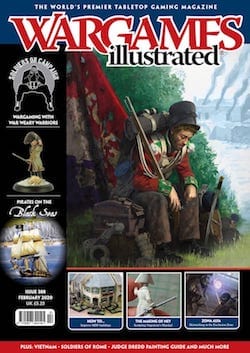 The theme for this issue is Soldiers on Campaign – and not – Soldiers, on Campaign. A subtle difference which means that rather than focusing on the wargame campaigns the soldiers are on, we are focusing on the soldiers that are on those campaigns. Simple! And if that’s about as clear as mud, you will see what I mean once you start reading the excellent contributions (written by wargamers, for wargamers) which have made it into this magazine. A great starting point is page 22 where we have The Seasoned Campaigner by Pete Brown in which he discusses ‘campaign hardened troops’, a subject taken up by Jim Graham in his article Campaign Effects on Armies, both focus on wargaming rather than history. I always find it impressive and interesting to examine a figure sculptor’s work-in-progress, and having commissioned a 28mm mini of Marshal Ney for our Giants in Miniature series we got ‘putty pusher’ Kris van Dyke (Van Dyke Figures) to do just that and show us how he went about creating the figure, see our article The Making of Marshal Ney. As ever, we’ve got lots more going on between the covers, taking you from Malplaquet to the apocalypse with numerous points in between. Enjoy! Dan Faulconbridge, Editor and Owner. OBSERVATION POST It’s a quiet time of the year for ‘new stuff’ but we’ve found a few interesting and eclectic items to make you aware of. WI AWARDS 2019 It’s time to announce the winners and runners up in the 2019 Wargames Illustrated Awards. THEME: THE SEASONED CAMPAIGNER Pete Brown has a look at campaign veterans and asks the thorny question, “Should they be any better than green troops?” WARGAMING MALPLAQUET Simon MacDowall recreates Malplaquet – the bloodiest battle of the 18th century. THEME: GOTHS AND ROMANS Simon MacDowall returns to look at the effects of campaigning on the Roman and Goth forces during their century long encounters. DESIGNER’S NOTES: ZONA ALFA Patrick Todoroff, author of the Zona Alfa rules from Osprey Games, shares some of the ideas and mechanics of this skirmish game of exploration and danger. THEME: “VIETNAM IS LIKE THE ALAMO” Empress Miniatures wner Paul Eaglestone provides some background to this war, along with a closer look at the Marines’ on campaign look. WHY I LOVE … BATTLEGROUP Andy Singleton shares his love for these World War Two wargames rules, where combined arms is key and the games are a good representation of the various types of combat. THEME: CAMPAIGN EFFECTS ON ARMIES (AND ARMY LISTS) Jim Graham provides some ideas for the effects of campaigns on our miniature armies. BLACK HEARTS, BLACK SHIPS: PIRATES IN BLACK SEAS Noel Williams outlines a favourite setting of seaborne
If you are seeing this message after signing in, PLEASE PRESS THE BROWSER REFRESH BUTTON