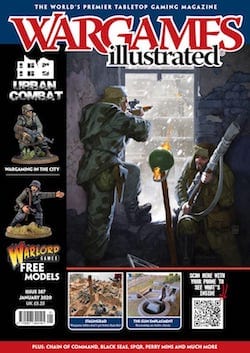 Quickly! Flip to page 36 of this magazine, then come back here…. Good, isn’t it? That’s Alan Sheward’s Stalingrad table. To coincide with this month’s Urban Combat theme Alan, with the help of buddy Adrian Deacon, took the trouble to come to WIHQ with their amazing table and set the whole thing up for us for a photo session and game of Chain of Command, with C-o-C designer Richard Clarke. The Stalingrad board makes for a smashing centrepiece to our Urban Combat theme, but we’ve got more great ‘UC’ articles taking in Ancients, Medieval and more World War Two. Outside of our theme content we re-make a 1960s Airfix classic in 28mm and we speak to Alan Perry about his new range of miniatures. Plus, we will also be introducing you to Milites Mundi – the new small scale mass battle game from Gripping Beast. Freebie figure frames are back this month courtesy of our friends at Warlord Games – bagged with this issue you will have either six Bolt Action German Grenadiers or six Early War German (Blitzkrieg) infantry. Turn to page 26 to see how ‘Pete the wargamer’ painted his Grenadiers and tune in to his YouTube channel to watch tutorial videos on painting Grenadiers and the Blitzkrieg infantry. OBSERVATION POST On our recent trip to Crisis in Antwerp we gathered lots of new products from various European manufacturers and we share them with you in this month’s OP. THEME: WE BUILT THIS CITY Pete Brown offers some personalised experiences and useful suggestions to introduce the main ideas behind our theme – Urban Combat – on the tabletop. PAINTING GERMAN GRENADIERS Pete Harrison provides a painting guide to one of this month’s freebie figures – a Warlord Games plastic German Grenadier. THEME: BUILDING A RUINED CITY We talk to inspiring model maker Alan Sheward about the creation of his award winning Stalingrad table. THEME: URBAN COMBAT, CHAIN OF COMMAND STYLE Utilising the wonderful wargames table mentioned above we got to play a game of Chain of Command with none other than C-o-C author Rich Clarke. DRINK GIN, EAT ELEPHANT! The man they call The League of Augsburg – Barry Hilton – presents a bite-sized piece of Great Northern War action. THEME: ‘KNOCK ’EM ALL DOWN’ THE BATTLE OF AACHEN, 1944 Paul Leach introduces a late war urban battle which saw tough US troops taking on a mixed bag of German troops in a city of no strategic value. FIGURE FOCUS: PERRY MINIATURES’ WAR OF THE TRIPLE ALLIANCEWe caught up with Alan Perry and asked him about his new figure range for The War of the Triple Alliance (1864 – 1870). THEME: PANIC ON THE STREETS OF ARGOs AND
If you are seeing this message after signing in, PLEASE PRESS THE BROWSER REFRESH BUTTON