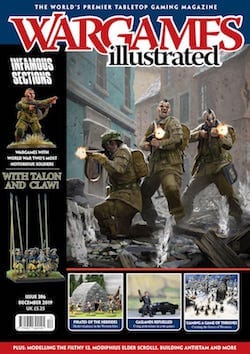 You can’t go wrong wargaming with a bunch of mohawk sporting US paratroopers known as the ‘Filthy 13’ or indeed a group of armed British citizen militia known as ‘Dad’s Army’, both (very different!) sets of warriors featured in this month’s ‘Infamous Sections’ theme, along with Popski’s Private Army – a rag-tag collection of heroic individuals who fought their way across North Africa and into Italy during World War Two. Our Judge Dredd article is this month’s nod to the festive season, and whilst the whirl of all the preparation for Christmas and the New Year gathers pace, you can sit back with your favourite tipple and enjoy that article along with plenty of other quality contributions to the magazine ‘by wargamers, for wargamers’, including a Battle Report on a game I myself played in – an introduction to the Great Northern War – courtesy of Barry Hilton and his With Talon and Claw rules. Have a very Merry Christmas, a Happy New Year and may all your dice rolls be 6s (… unless you are rolling D20s of course…). OBSERVATION POST Our regular look at what’s new and forthcoming in the hobby. THEME: THE FILTHY Neil Smith delves into the Hollywoodized history of this most infamous of  World War Two sections and comes out with some great wargaming suggestions. BUILDING ANTIETAM Andy Thomlinson tells us about his project to build a scale model of the Antietam battlefield, for use by the South London Warlords in their Fire and Fury games. THEME: PLASTIC PARACHUTIST CONVERSION COURSE The Filthy 13 are back for more! In this article Phil Lewis shows us how to turn a M43 uniform into the M42, to represent this infamous section as they would have appeared on the eve of the Normandy landings, 1944. PIRATES OF THE HEBRIDES Games Designer Chris Peers provides some information on a skirmish faction which may  be used for his On The Seven Seas and Dan Mersey’s Lion Rampant rules. THEME: A BUSY NIGHT IN LITTLE ’APPENS In keeping with this month’s theme, one of the most Infamous Sections of World War Two (albeit one that only came to light on BBC TV in the 1960s) springs into action in defence of their green and pleasant land. TALONS, CLAWS AND ROTTEN DICE Barry Hilton introduces WI Editor Dan to the Great Northern War via the latest supplement for Beneath the Lily Banners – With Talon and Claw. THEME: POPSKI’S PRIVATE ARMY Jim Graham introduces a unique warrior from World War Two who led a disparate group of troops into action through a number of theatres. AN OUT OF VEHICLE EXPERIENCE Some (unofficial) rules for using pedestrians in Gaslands. GAMING A GAME OF
If you are seeing this message after signing in, PLEASE PRESS THE BROWSER REFRESH BUTTON