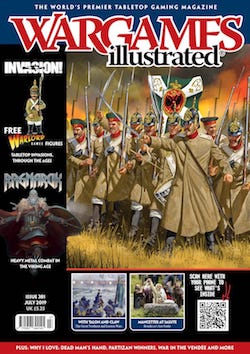 Buy this in Print We do hope you are enjoying your free plastic frames every month, this offer is set to continue throughout 2019 (and hopefully beyond). This month’s offering is quite special, the Crimean War Russians bagged with this issue have only just been released by Warlord Games, so this may well be the first time you have seen them in the flesh… or rather plastic. Very nice they are too, I am sure you will agree. As well as cajoling Warlord into letting us have the frames (thanks fellas!) we asked Rick Priestley to pen an article using said Russkies in Black Powder, as part of this month’s ‘Invasion!’ theme. Ace painter Jamie Getliffe also shows us what colours to put where on your figures, with his guide on page 21. You will find more invasions in our articles on the First Schleswig-Holstein War 1848, the Estonian War of Independence 1918, the invasion of Canada 1785 and The Battle of Carrickfergus 1760. We hope you enjoy them all and are more than tempted to give each a go, in miniature. Happy reading and rolling. OBSERVATION POST A look at new and forthcoming goodies in our hobby. THEME: THAT FLOOD OF SULLEN SOLDIERYSoimonov’s assault during the Battle of Inkerman, 5 November 1854. Inspired by this month’s free cover mount, Rick Priestley provides a Black Powder scenario and special rules for using your new Crimean War Russians against the vile British invaders. COVER MOUNT FOCUS: PAINTING YOUR CRIMEAN WAR RUSSIAN INFANTRYMANJamie Getliffe (who painted the Russian on the cover) shows us what paint to put where. DESIGNER’S NOTES: RAGNAROK Games Designer Tim Korklewski tells us exactly what “Heavy Metal combat in the Viking Age” is all about. THEME: THE BATTLE OF CARRICKFERGUS 1760The French attack on Ulster has been described as a “forgotten footnote of the Seven Years War” but for wargamers this rare French landing on British soil provides some great wargaming opportunities, not only of the event itself but also for the “what if” battles it presents. Pete Brown takes up the story…. PARTIZAN 2019 – THE WINNERS A look at the best tables from the latest Partizan wargames show. TERRA FORMING THE ELF KING Chris Abbey of Sally 4th show us how he went about ‘terra-forming’ the terrain for a characterful demo table. separate THEME: THE AMERICAN INVASION OF CANADA 1785 Simon MacDowall introduces us to a sideshow of the American War of Independence which takes the war north against local Canadian and garrisoned British forces. LEARNING THROUGH THE LENS OF PELELIU Passionate History teacher and gamer Jared B. Fishman tells us about a recent wargaming project he was involved with which galvanized the students at his
If you are seeing this message after signing in, PLEASE PRESS THE BROWSER REFRESH BUTTON