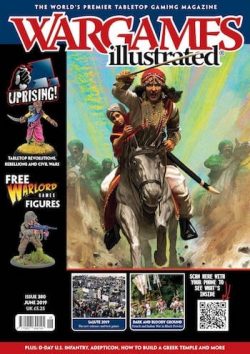 Buy this in Print FROM THE EDITOR The dust has now settled on Salute 2019, certainly the biggest wargames show of the year for the WI team. All of our staff attend, hundreds of Salute goers subscribe to the magazine and we run the world’s largest participation game at any show (see page 58). The coverage of Salute in this month’s magazine reflects its ‘big deal’ status, with six pages dedicated to our favourite games from the convention and eight pages of Observation Post given over to ‘Spotted at Salute’ – all the new releases showcased at the event. Not to be outdone, our roving reporter Teras from Geek Nations Tours, provides us with a view of another massive event on the convention circuit – Adepticon in Chicago – taking in some of the tables we think our readers will find the most interesting. Our theme for this month is ‘Uprising!’ and features four articles that have rebellions, revolutions and civil wars as their focus. We take you from the fall of the Roman Empire in Gaul to the 1946 Greek Civil War, via the struggle for Hungarian independence and the Indian Mutiny. Your freebie cover mount this month is a Bolt Action World War II US Infantry frame, courtesy of Warlord Games. Tying in nicely with the 75th anniversary of D-Day, at which American troops like the ones represented on the frame played a major part. For more information see our ‘Frame Focus’ on page 26. Happy reading and rolling. OBSERVATION POST A look at new and forthcoming goodies in our hobby. With a focus on ‘spotted at Salute 2019’. THEME: WARLORDS AND REBELS Author and wargamer Simon MacDowall presents background, gaming notes and a multi-player scenario for the bacaudae – anti-Roman revolutionaries. COVER MOUNT FOCUS: U.S. INFANTRY AT D-DAY Dom Sore presents some thoughts on this month’s cover mounted frame, which commemorates some of those who hit the beaches on D-Day 75 years ago. THEME. LAKSHMI BAI: WARRIOR QUEEN Steve Blease explores the efforts of this amazing woman who defied an Empire and led her people against the British in the ‘Great Rebellion’. DESIGNER’S NOTES: DARK AND BLOODY GROUND Pete Brown introduces us to his latest Black Powder supplement which covers the French and Indian Wars. THEME: NO BRIDGE, NO COUNTRY! Bill Gray takes us to a Revolution that is little known outside Hungary but offers some interesting gaming options and a short but enjoyable campaign option. SHOW REPORT: SALUTE 2019 A tour of the table-topping highlights from the Salute 2019 wargames show. THEME: PIECING TOGETHER THE GREEK CIVIL WAR Matt Moran shows us how to convert models for use in the Greek Civil War of 1943-49. SNAKEMEN
If you are seeing this message after signing in, PLEASE PRESS THE BROWSER REFRESH BUTTON