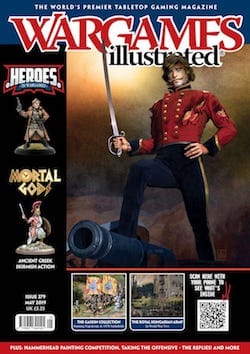 Buy this in Print FROM THE EDITOR I stand corrected, after chiding Richard Clarke of Too Fat Ladies for giving the characters in his games “silly names”, Rich rebuked with a well reasoned and constructed article on why it’s never a bad idea to give the heroes in your games monikers like Private Parts or General Annoy Ance. If you too are in need of convincing then turn to page 32. We Can be Heroes is just one of the articles that form this month’s theme of ‘Heroes in wargames’. Barry Hilton introduces us to a forgotten hero of the 17th Century ‘Salamander’ Cutts. Neil Smith provides some ideas for getting historical heavyweights into the cut and thrust of battle in Bring on the Action Men, and we have three other articles besides that all shine a light on tabletop heroes, oh and Harry Flashman. Outside of our theme we have Mortal Gods, the new game from the team that brought you Gangs of Rome and Test of Honour, a look at what’s available in 28mm for the Royal Hungarian Army, the stunning figure collection of Bill Gaskin, the winning entries in our recent painting competition at Hammerhead and plenty more beside. Your freebie cover mount this month is a frame of American War of Independence Colonial Militia Men, courtesy of Warlord Games, providing the opportunity you have been waiting for to get into a new period, or bolster your existing forces. Happy reading and rolling. OBSERVATION POST A look at new and forthcoming goodies in our hobby. THEME: PLAYING THE HERO Just how can we set about fielding Heroes on the tabletop? We look at how different rules systems deal with the issue. COVER MOUNT FOCUS: AMERICAN MILITIA Wayne Bollands takes a look at outfitting American War of Independence Colonial Militia Men – this month’s print magazine’s free cover mounted plastic frame. RULES SHOWCASE: MORTAL GODS This game has been causing quite a stir since its recent release. Here’s the low-down on how it plays, and why you need it in your collection. THEME. WE CAN BE HEROES One half of gaming gurus Too Fat Lardies – Richard Clarke – shares his thoughts on tabletop heroes and silly names. THE ROYAL HUNGARIAN ARMY A  look at what’s out there to help create a World War Two Royal Hungarian Army. THEME: LORD JOHN‘SALAMANDER’ CUTTS After reading this article by Barry Hilton on one of his historical heroes, you will be as fascinated by The Salamander as we were. ADRIAN MADE ME DO IT Mark Hargreaves has had the pleasure and pain of working on numerous modelling projects for Adrian Shepard. In this article he tells us about some of the
If you are seeing this message after signing in, PLEASE PRESS THE BROWSER REFRESH BUTTON