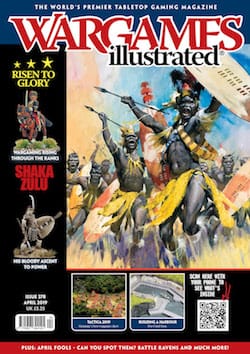 FROM THE EDITOR Well, I’m worn out! Having contributed a ‘personal best’ number of articles to this month’s magazine (two) I deserve a lie-down. Having said that there’s no time for lying down at the moment as the show season has well and truly kicked off. We’ve already ‘done’ Vapnartak, Hammerhead is this weekend (as I write this) and a couple of weeks ago I covered Tactica – read my report on page 71. Plus, by the time you read this, the leviathan that is Salute will be about to happen, or happening if you pick up this mag at the show. Busy, busy! This month’s theme is ‘Risen to Glory’ and we feature six articles that in turn feature historical characters who have risen through the ranks, or, in the case of my second article – see page 16 – discuss why in the British Army this process was helped if you had vast amounts of money. Sub Editor Wayne chips in with a further theme article that looks at wargames that make use of ‘in game progression’. Happy reading and rolling. OBSERVATION POST A look at new and forthcoming goodies in our hobby. With a focus this month on products released at Vapnartak and Tactica. THEME: RISING TO GLORY Editor Dan Faulconbridge leads us into this month’s theme by taking a look at the Purchase System in the British Army. RULES SHOWCASE: SEVEN DAYS TO THE RIVER RHINE Great Escape Games came by to plunge us into alternate history World War III, using their new rules variant of the Iron Cross rules system. THEME: SHAKA’S BLOODY ASCENT Neil Smith, author of the Zulu! Black Powder supplement, takes a look at the rise of Shaka Zulu and the creation of the Zulu Empire. HOW TO… BUILD A 1/300TH SCALE HARBOUR Paul Davies shows us ‘how to’ build a harbour for your Cruel Seas ships. THEME: HORATIUS OF THE TYROL Rising from slave to the higher echelons of the French army, Thomas-Alexandre Dumas then went from being a favourite of Napoleon to obscurity.  NOT ANOTHER APRIL FOOL Pete Brown challenges our historical knowledge and introduces us to snippets of real or imagined warfare madness. THEME: JOHNNY CLEM – DRUMMER BOY OF CHICKAMAUGA An unlikely hero, who rose from the ranks to become an inspiration to many. PURISTS LOOK AWAY NOW A look at a couple of modeler Richard Garretson’s projects: a French and Indian War table and Post Apocalyptic town. THEME: TROOPER TO MARSHAL Jim Graham charts the rise of Georgy Konstantinovich Zhukov, from peasant beginnings to the heights of power as the true saviour of the Soviet Union SHOW REPORT: TACTICA 2019 WI Editor Dan Faulconbridge reports on his
If you are seeing this message after signing in, PLEASE PRESS THE BROWSER REFRESH BUTTON