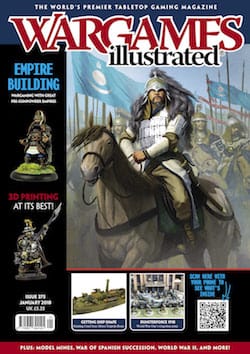 Merry Christmas and a Happy New Year to all our readers! Our first magazine of 2019 features as its theme: (pre-gunpowder) Empire Building. We have four articles taking us to the great empires of Persia, Rome and Mali then we saddle-up with Genghis Khan and the Mongolian Horde and head to victory across the tabletop. Outside of our theme we have more Cruel Seas, 3D Printing, The War of the Spanish Succession, World War One, World War Two, model making, our round-up of what’s new in Observation Post and more. Happy reading and rolling. OBSERVATION POSTA special look at what we ‘Spotted At’…the Crisis show in Antwerp plus four more pages of what’s new and worth knowing about from elsewhere. THEME: FOUR CORNERS OF THE WORLD Colonel (Retired) Bill Gray begins our Empire Building theme by charting the Rise of Persia under Cyrus the Great, one of the great empires of the ancient world. Bill provides a guide to their army composition, tactics and use on the tabletop. PAINTING CRUEL SEAS TORPEDO BOATS A quick brushwork guide to painting our recent freebie Warlord Games Cruel Seas MTBs, PTs and S-Boats. THEME: THE ULTIMATE EMPIRE? Simon MacDowall continues our theme content with a look at the rise of the Roman Empire and the many wargaming opportunities offered by seven centuries of constant expansion. OF SCAFFOLDS AND ALCOHOL BATHS We recently visited 4Ground, to investigate their ‘sideways’ move from the world of laser cut MDF to “the future of miniature manufacture”: 3D printing. THEME: THE PUNISHMENT OF GOD Pete Brown champions Genghis Khan and his Mongol hordes as a great wargaming army, with ideas on how they could be represented on the tabletop. DESIGNER’S NOTES: ALBEDO COMBAT PATROL, ACP164 Chris Abbey of Sally 4th explains the background and design features of this new game based upon Buck Surdu’s Combat Patrol system and Steve Gallacci’s comics. THEME: MANDEN KURUFABA THE MALIAN EMPIRE Dom Sore presents a pre-gunpowder African empire that often slips through the cracks of history THE RACE ACROSS IDLIB PROVINCE Over the last two years Adrian Shepard and friends have presented some show stopping games at the Colours wargames show in Newbury and this year was no exception. Continuing their battles in the Middle East during World War One, at this year’s event they presented ‘The Race Across Idlib Province’. “A STIFF FIGHT” Bob Giglio introduces us to the adventures of Dunsterforce, and provides a unique scenario in support of his new book focusing on their exciting and exotic actions in a largely forgotten corner of The Great War. “HOW TO… MAKE MINES” Paul Davies shows us how to make model 1/300th mines, for use with Cruel Seas or any other
If you are seeing this message after signing in, PLEASE PRESS THE BROWSER REFRESH BUTTON