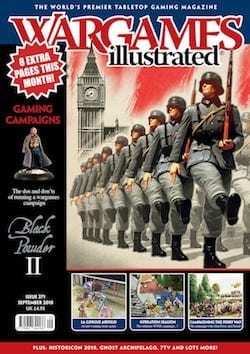 Who doesn’t like campaign wargaming? What’s not to like about playing through a series of linked battles and adding in entertaining additional elements to your games, like logistics, character development and herding cats (i.e. your fellow wargamers!). In our theme for this issue we have asked Alan Perry (Perry Miniatures), Joe McCullough (Osprey Games) and two more of our veteran contributors to supply us with articles that offer advice on running a campaign, introduce us to their own campaigns, or present us with packaged campaigns to run ourselves. Along the way we take in campaigning during the Napoleonic Wars, the American War of Independence, World War Two and more besides. And all of our contributors have been candid about the mistakes they have made whilst running wargames campaigns – so you don’t have to! Other articles you shouldn’t miss include a look at the award winning show game La Gorgue Airfield (page 64), our Designer’s Showcase for Black Powder Two (page 54) and the second installment of Reimagining the Crusades (page 76), in which Doctor Steve Tibble ‘reimagines’ Crusader army formations.   OBSERVATION POSTA special look at what we ‘Spotted At’ Historicon 2018. THEME: CARRY ON CAMPAIGNING Pete Brown is back, with some thoughts on running a Wargames campaign. DESIGNER’S NOTES: 7TV APOCALYPSE Co-author and Sub-Editor Wayne shares some of the decisions and ideas behind this stand-alone rules system coming soon from Crooked Dice Game Design Studio. THEME: THE DIAMONDS OF ELIAS SKULL Joe McCullough presents an exclusive mini-campaign for his Ghost Archipelago rules from Osprey Games. CRETE 1941 – PART TWO Following on from last month’s introduction, James Morris offers four scenarios for gaming during the World War Two Battle for Crete. THEME: COMPUTER CAMPAIGNING Colonel (Retired) Bill Gray shares some thoughts on the running of campaigns and realities of campaign gaming using computers. DESIGNER’S SHOWCASE: BLACK POWDER II Rick Priestley explains the main changes made to this extremely popular games system and the upcoming re-vamp. THEME: CAMPAIGNING THE PERRY WAY Alan Perry takes us through a typical Perry Campaign Season, taking in two different campaigns played with his chums. LA GORGUE AIRFIELD Having won an award at Partizan 2018 for Best Demo Game, we caught up with Dave Andrews and Aly Morrison to find out more about this game. THEME: SEELOWE! Pete Brown discusses how to use works of fiction as a framework for your campaigns. He uses ‘Operation Sealion’ (a wargaming classic!) as an example. THE FLASHING KNOBS “Liston very carefully I shall say zis only once” – Mike Wilkins introduces us to his quirky Bolt Action tournament force. REIMAGINING THE CRUSADES – PART TWO: FORMATIONS Dr. Steve Tibble continues this fascinating series with a look at
If you are seeing this message after signing in, PLEASE PRESS THE BROWSER REFRESH BUTTON