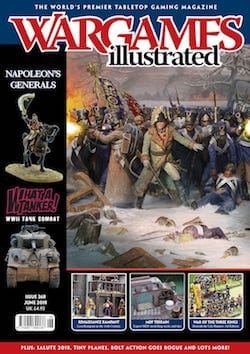 When we wargamers aren’t giving our generic generals ‘hilarious’ made up names like Major Lee Small or General E. Speaking, we like nothing better than gaming with the big guns of military history, and in this issue of WI we provide the opportunity to do just that with some of the biggest names who served under the biggest name (citation needed) in military history – Napoleon. Most of Napoleon’s Marshals and Generals have a story worth telling and this month we focus on a couple of individuals, Marshal of the Empire Michel Ney and General Count Jean Rapp, as well as highlighting some rules and miniatures that would work well for a myriad of other ‘Napoleon’s Generals’, from the big hitters like Joachim Murat to the less well known, like Nicolas-Marie Songis des Courbons, When we’re not on the march with Napoleon and his generals, we have got plenty more for you to enjoy besides, including, two Rules Showcase articles looking at World War Two tank warfare and the 17th Century Lace Wars, rules for Lion Rampant in the Renaissance (in our imaginatively titled Renaissance Rampant article), using Congo to play out actions with Conquistadors in South America, Lord of the Rings, Rogue Trooper and more beside! OBSERVATION POST Our monthly round-up of new and forthcoming wargames products that have caught our eye THEME: THE GREAT AND THE GOOD Neil Smith kicks off this month’s theme on Napoleon’s Generals by taking a look at some of his favourites and how they should be represented on the tabletop. RULES SHOWCASE: WHAT A TANKER! The Too Fat Lardies came to see us to show off their new World War Two tank combat game. THEME: NAPOLEON’S GENERALS IN PLASTIC Rupert Mitchell offers once more his snapshot of the plastic figure sets that can be used to support this month’s theme. MODELLING: MDF TERRAIN Gary Faulkner offers some hints and tips on how to get the best from MDF kits. THEME: THE BRAVEST OF THE BRAVE Adrian McWalter presents us with information on one of the most well known of Napoleon’s Marshals, the ‘ruddy faced’ hero who played such a major role within and without the French Empire. SALUTE 2018 Our report of the world’s biggest wargames show, featuring all the best demo and participation games. THEME: JEAN RAPP Colonel (Retired) Bill Gray takes a look at a general who rose from humble beginnings tothe dizzy heights of the Empire. TAKING TO THE SKIES WITH TINY PLANES We take a look at a number of companies that provide a variety of useful or different aircraft for WWII aerial gaming. THEME: THE LITTLE CORPORAL – HIS FRIENDS AND ENEMIES Dom Sore explores the options for
If you are seeing this message after signing in, PLEASE PRESS THE BROWSER REFRESH BUTTON