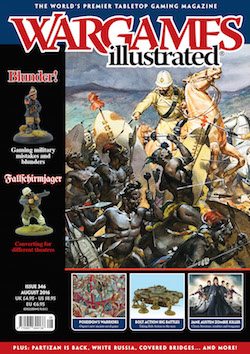 THEME: IF YOU CAN KEEP YOUR HEAD Neil Smith introduces our theme this month, using rules examples and moments from history to draw us into the world of the ‘blunder’. FIGURE SPOTLIGHT: WARLORD GAMES PLASTIC FALLSCHIRMJÄGER Phil Lewis looks at creating 28mm German Paratroopers for a range of different theatres. THEME: MAKING A GAME OUT OF A MISTAKE Doomed heroism and the tabletop wargame, Anglo-Zulu War style. BOLT ACTION: BIG BATTLES How to ‘go large’ with this set of World War Two rules. THEME: DOH! What are the practical things needed to wargame various styles of ‘blunder’ on the tabletop? PROJECT SHOWCASE: TWO BATTLES, TWO LANDMARKS Nick Buxey looks at the creation of two key buildings that provide a focus for a particular couple of battles. THEME: BETWEEN THE JAWS OF HYENAS In recreating the disaster at Adwa in 1896 on the tabletop, Pete Brown provides a scenario which can be used for various blundering situations. HOW TO…: MAKE A NORTH AMERICAN COVERED BRIDGE Paul Davies presents his latest model making project. THEME: BLUNDERING TO GLORY Prolific games designer Sam Mustafa presents some ideas dealing with ‘blunders’ within some of his rules systems. THE BATTLE OF RAMILLIES Simon MacDowall shares his experience and expertise of wargaming one of Europe’s greatest Eighteenth Century battles. SHOW REPORT: PARTIZAN 2016 A round up of this ‘revived’ show, bigger, better, brighter! RULES SHOWCASE: JANE AUSTEN, ZOMBIE KILLER Sometimes, classic literature and modern cinema can be blended to create a whole new gaming genre – Georgian zombie hunting, anyone? WHITE RUSSIA There’s no business like snow business, and no battles like those which include snow… DESIGNER’S NOTES: POSEIDON’S WARRIORS Ramming speed! Rules author John Lambshead provides an insight into this new set of Ancient naval warfare rules. FLAMES OF WAR AND THE WORLD WIDE WEB A look at the range of internet locations where Flames Of War gamers can find interesting content. CLUB FOCUS: GRIMSBY WARGAMES CLUB The latest in our feature looking at the UK club scene, this time at a club which owns its own premises. FIGHTING TALK: THE RIGHT STUFF Pete Brown ask questions about a topic which vexes many and leaves others completely cold – do we have the right to demand that others have the ‘right stuff’?
If you are seeing this message after signing in, PLEASE PRESS THE BROWSER REFRESH BUTTON