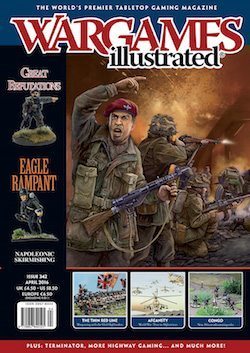 THEME: GREAT REPUTATIONS Neil Smith discusses the nature of reputation and how it is to be gained and lost upon the field of battle and tabletop. HAMELIN 1985The Flames Of War: Team Yankee crew present details on how to integrate the Afgansty veterans of the VDV into your battles for dominance in Western Europe. THEME: SETTING THE STANDARD We take a look at the first ever battle of the early incarnation of the Scots Greys and their reputation making efforts at Blenheim. EAGLE RAMPANTAnother variant of the Lion Rampant rules, this time replacing armour and swords with shakos and muskets THEME: THE THIN RED LINE Jim Graham takes a close look at the original ‘Thin Red Streak (Line)’ and presents some thoughts on gaming their famous action at Balaklava. FORCE MAJEURE: OPERATION THURSDAY, BURMA 1944The second part of Neil Smith’s look at the work of the Chindits during the Second World War. THEME: A DARK SULLEN MYSTERY From the Halls of Montezuma to the Shores of Tripoli… and an unremarkable wood in France seals the early 20th Century reputation of the US Marine Corps. RULES SHOWCASE: CONGO The latest offering from Studio Tomahawk allows gamers to venture into the Heart of Africa at the head of a band of plucky adventures, or as native warriors defending their homeland. THEME: THE DEVIL’S BIRTHDAY PARTY Some battles are the stuff of legend, even when the side that loses become heroes amidst the nightmare. Arnhem is one of those battles… BAD COP, GOOD COPS In the second in this series of articles, we present another official scenario for Terminator Genysis: The Miniatures Game based on events from the movie. Kyle Reese is on the run in downtown LA in 1984, with a T-1000 in pursuit. PROJECT SHOWCASE: OPERATION IRAQI FREEDOM Jay White takes us through his quest to re-create recent history on the tabletop, by providing a guideline for others to follow. RECYCLING LITTLE ROUND TOP Our Salute 2016 showcase game and how it transitioned across time and space to move from 1860’s America to the North West Frontier in the late 1870’s. ON THE ROAD Having introduced us to the genre (WI341), Dave Taylor looks at the methods he uses to convert diecast cars for use on the Post Apocalyptic highways of the near future. FIGURE SPOTLIGHT: SPECIAL OPERATIONS TEAM We take a look at some of the options for those who are looking to represent modern military miniatures in plastic or just want PA survivors who pack a punch! CLUB FOCUS: NOTTINGHAM WARGAMES CLUB A local trip out for Sub-Editor Wayne to visit a club that has been around for a long time and is still going strong. MODELLING TRICKS AND
If you are seeing this message after signing in, PLEASE PRESS THE BROWSER REFRESH BUTTON