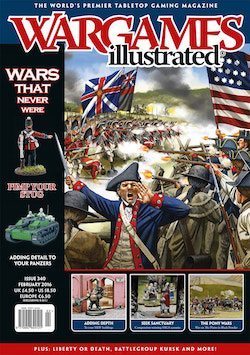 Wars that Never Were Gary Mitchell explains the concept behind this month’s theme and provides his top suggestions for ‘Wars that Never Were’.   Ice cold in Berlin In connection with their latest ruleset Team Yankee, Battlefront provide us with an account of Cold War operations in Germany by ex-British Intelligence Operative and author Harvey Black.   Imagi-Nations Charles S. Grant explores this aspect of gaming and adds his thoughts on creating your own 18th Century nation.   “A Road we do not Know” Musings and rules amendments to re-create the small-scale actions of the American West on the tabletop using the Black Powder rules.   The Battle for Britain 1692 Barry Hilton recounts the latest events inhis alternate history of the British Isles, this time focusing on a battle for the throne of the nation. adding depth to your   MDF Buildings Model making maestro Dave Taylor shows us how to add organic detail and dynamism to our MDF buildings.   The Battle for Fort Ontario Don Effinger presents a series of scenarios for the British Intervention in the ACW, which are then played out and ably supported visually by the Perry Twins.   Seek Sanctuary The Gripping Beast team recently ran a competition to design a SAGA scenario based on their new civilian and livestock figure packs. We present the winning entry here for your usage.   The Zimmerman Telegram A look at the potential for fi ghting World War One on US and Mexican soil.   Pimp your Stug III Phil Lewis takes a Warlord Games Bolt Action tank and provides detailed instructions on, er, how to detail it for tabletop usage.   Winter of ‘79 Forget what you think you know, get to the army surplus store and head back to the late 1970’s in the Disunited Kingdom. It’s anarchy in the UK as Mark Hannam provides an insight into gaming during a more modern civil war.   Figure Spotlight: Liberty or Death You’ve bought the Warlord Games box set but where do you go from here? We take a look at what can be done to expand upon this giant of a boxed set.   Cold War Terrain For those fighting World War Three on the tabletop, Andy Rix outlines the types of terrain needed to make your tabletop battles more ‘real’.   The Road to ‘Lokhvista’ Warwick Kinrade, author of the Battlegroup series of World War Two rules, talks about his recent campaign weekend.   Club Focus: Sheffield and the Rotherham Wargames club In the first of a new series, Sub-Editor Wayne sets off with notepad and camera to check out what games are being played at clubs up and down the country and
If you are seeing this message after signing in, PLEASE PRESS THE BROWSER REFRESH BUTTON