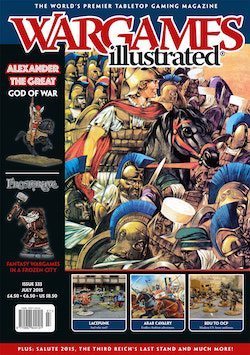 The Armies and Battles of Alexander the Great Ask almost anyone to name the greatest generals of all time and it is fairly reasonable to assume that Alexander the Great’s name will be near the top of their list. Simon MacDowell kicks off this month’s Alexander four article theme with this piece on his armies and battles.   The Third Reich’s Last Stand In this article to accompany the new Flames Of War intelligence handbook, Berlin, Wayne Turner tells us about his different approach to creating the Intelligence Briefi ng for the Germans.   Wargaming Hydaspes Alexander’s fight against Porus on the Hydaspes river in 326 BC, one of the most colourful and unusual set piece battles of the ancient world.   BDU to OCP Kaleb Dissenger presents a look at the changing uniforms of US military forces during the thirteen year period of the wars in Iraq and Afghanistan.   The Ends of the Earth Simon MacDowell continues our Alexander the Great theme by turning his attention away from larger set piece battles to smaller, and possibly more manageable, tabletop encounters.   Rules Showcase: Frostgrave For this month’s Showcase we invited author Joe McCullough to WI HQ to show us his new, and eagerly anticipated, game of ‘Fantasy Wargames in a Frozen City’, published by Osprey.   Battleday 2015 Seventeen games, 15 different rule sets, all playing the same battle; Hydaspes 326 BC – we report from the latest Society of Ancients Battle Day.   Show Report: Salute 2015 All the fun of Excel! Twelve pages on what you missed, or what you need to see again, from the world’s biggest wargames show.   Figure Spotlight: Arab Cavalry In this Figure Spotlight, we look at the many and varied uses of the two new plastic boxed sets of cavalry from the Gripping Beast Plastics stable.   Lacepunk… And why not? Barry Hilton presents a swashbuckling romp through the world of the Musketeers, including the facts behind the fiction and how re-create similar adventure on the tabletop.   Modelling Tips and Tricks: Creating Thatch Another set of quick and easy methods to help you make your house roofs look more realistic. Brought to us by Pete Harris.   Saltanovka 1812 In this scenario, set during the initial invasion of Russia during the summer of 1812 (so, for a change, no snow!), Adrian McWalter not only provides information on re-fighting a battle using the Black Powder rules but also provides an insight into his upcoming third Albion Triumphant supplement for Warlord Games.   Gaming Survivors A whole campaign system for those who want to game a very British 1970’s version of life after an apocalypse, neatly packaged by Gary Mitchell.
If you are seeing this message after signing in, PLEASE PRESS THE BROWSER REFRESH BUTTON