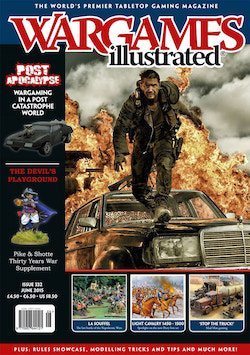 Whoops! Post Apocalypse! In our lead article for this month’s theme, Rich Chappell outlines the benefits and opportunities provided to those willing to enter the Wasteland   Germany’s Doom! Soviet forces in Berlin Berlin is the last of Flames Of War’s current series of late war intelligence handbooks. It focuses on the Soviet assault on the German capital city of Berlin, the battles to encircle it, and the final desperate defence by the rag-tag German forces defending it.   Stop the Truck! The evolution of a participation game based upon a classic sequence from a great movie sequel, which all started with one man’s quest to re-create the vehicles he had seen.   An Army in Six Square Feet Although most gamers will have heard of the Gatling Gun, it was only one of many rapid fire and esoteric weapons created during the American Civil War, as outlined by Mike Bradford.   How to… Create a Post-Apocalyptic Gateway Paul ‘Overlord’ Smith takes us through the creation of a gateway you may recognize, community in a world without mercy.   The Last Battle In a follow up to last month’s theme, encounter between French and Austrian forces on French soil, ten days after Napoleon’s abdication!   Rules Showcase: Terminator: Genysis, The Miniatures Game Our latest set of rules is based upon another post-apocalyptic nightmare, brought to the marketplace by the heroes at River Horse Studios.   Project showcase: The Blücher Project Andy Callan takes us through his efforts to game using the Blücher rules, including down scaling and creating his own unique bases.   The Post-Apocalyptic Fantastic Joe McGuire takes us through more post-apocalyptic gaming options, complete with the more fantastical opportunities on offer.   Designers Notes: The Devils Playground Author Neil Smith outlines his thoughts behind the creation of this Thirty Years War supplement for Warlord Games Pike and Shotte rules.   Show Report: Adepticon 2015 Dave Taylor once again made his annual visit to this growing, vibrant convention and presents an interesting insight into what went on.   Figure spotlight: Some Horses for your Kingdom Regular contributor Neil Smith takes a look at one of the latest plastic boxed sets from Perry Miniatures and asks: where in history can I wargame using these figures?   Fighting Talk: too much of a good thing
If you are seeing this message after signing in, PLEASE PRESS THE BROWSER REFRESH BUTTON