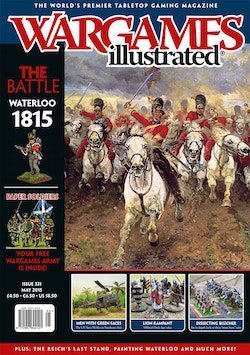 Free Figures! A look at this year’s give-away show figures from Wargames Illustrated (one of which is seen down there on the left!) Waterloo Obsession In our lead article for this month’s theme, Gary Kitching discusses how he, along with many other wargamers, became obsessed with ‘The Battle’. The Reich’s Last Stand The Battlefront Studio introduce us to Berlin, the most recent Late War supplement for Flames Of War. Waterloo Adventure A guide to visiting the Waterloo battlefi eld from two stalwart wargaming chaps. Landwasters and Raven Feeders Dan Mersey, author of the Osprey published Lion Rampant rules, presents his ‘official’ take on using the rules for games set in the Dark Ages / Early Medieval period, complete with sample Warbands and new rules. Waterloo Conclusion of a Campaign Gary Kitching returns, providing the final report on his recent participation in a Hundred Days Campaign, which culminated in a slightly different fi nal battle. Paper Soldiers Wargamer and esteemed military artist Peter Dennis provides you with a set of paper warriors which can be used on the tabletop, then kept or placed in a handy recycling bin! Painting Waterloo A guide to painting fi gures for the three main armies at Waterloo, presented by ‘Brushsmith Extraordinaire’ Dave Taylor Rules Showcase: Divisional Commander The latest set of rules we have ‘played out’ are designed to simulate fairly large battles from throughout the era encompassed by the Napoleonic Wars. Dissecting Blücher As a follow up to last issue’s ‘Rules Showcase’, WI Sub-Editor Wayne gathers some trusted friends to game using Sam Mustafa’s most recent rules release.  An Invasion Thwarted! The US invasion of Canada, 1813. A campaign which is often brushed under the carpet of history thanks to the since cordial relationship between the two nations, but one that makes for a great scenario, as presented in this article.   Men with Green Faces Mike Haught and Aaron Mathie look at the role of the US Navy SEALs during the Vietnam War and how these elite warriors can be used with the Brown Water Navy handbook for Flames Of War.   Project Showcase: creating Upsheet Creek At BLAM! 2014, Paul Mason presented an eye-catching game. He takes us through his initial process in turning thoughts to reality.   Fighting Talk: Have Army will Travel Pete Brown talks about which armies every gamer should own if they want to be able to play a game ‘any time, any place, anywhere’.
If you are seeing this message after signing in, PLEASE PRESS THE BROWSER REFRESH BUTTON