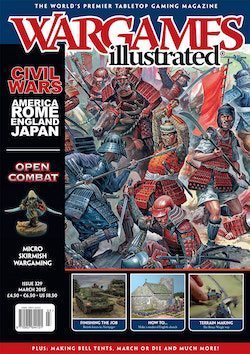 Civil Wars In our lead article for this month’s theme, Neil Smith provides a definition of what a ‘civil war’ actually is and presents examples that could be translated into tabletop action.   Endgame on the Elbe Mike Haught provides a preview of some of the new Flames Of War digital content for Nachtjäger the new Intelligence Handbook.   Rome’s Civil Wars An introduction to Rome’s many civil wars, along with a report on how Steve Dake and buddies went about gaming one of them.   High Adventure & Low Tricks in the back of Beyond Sub-Editor Wayne provides an account of the activities of the League of Extraordinary Kriegspielers at their recent gaming weekend.   Sekigahara 160 As the final, decisive battle of the Shogunate Wars, this was a bloody affair. Joe Krone provides an account of the battle and ideas for a scenario to create a tabletop version.   Plundering Plastics The release of Nachtjäger provides the spur for the introduction of a new range of kits for the British forces, detailed here.   “We might fight no more in holes” Bob Giglio presents an account and detailed scenario for this skirmish level battle during the English Civil War, complete with photos from Keith Johnston and Alan Sheward.   Tall tales from the Raj David Bickley takes us on an adventure through Rhanzlistan, his fictional setting based upon the North West Frontier.   Artillery Hell? Artillery Heaven Nick Buxey discusses the means by which American Civil War artillery may be utilized and represented as gaming pieces.   How to Build a Medieval Church Paul Davies takes us on a step-by-step guide on how to achieve the right ‘look’ for a style of church which endures even today.   Never cross a Deadly Longstreet Our Sub-Editor Wayne Bollands presents a comparison of two sets of rules for the ACW which offer different gaming experiences.   Finishing the Job Mike Haught returns to outline how to use the new releases for the British forces within your games using the Nachtjäger supplement.   Project Showcase: March or Die! Tim Harris takes us through one of his latest projects and what inspired him to create his own ‘classic’ French Foreign Legion force.   The Limpo river Campaign Taking their inspiration from events in German East Africa during WWI, the Wigan Wargames Club present the fi rst in a two-part article on their recent campaign.   Happy campaign! Ever wanted to make your own 28mm scale bell tents? Well, Malc Johnston and Dave Tuck are here to show you their method!   The Kissingen Board Rules writer and terrain maker Bruce Weigle talks us through the construction of one of his (very!)
If you are seeing this message after signing in, PLEASE PRESS THE BROWSER REFRESH BUTTON