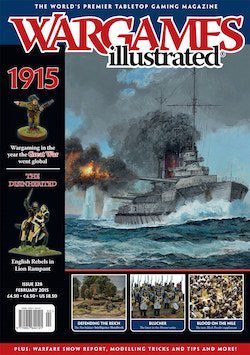 Second Ypres, 1915 In our lead article for this month’s theme, Jim Graham demonstrates how warfare had begunto change by 1915, using the events around Ypres as a backdrop.   Defending the Reich Wayne Turner discusses the fi ner points of the Nachtjäger Intelligence Handbook for Flames Of War and the new equipment which can be utilized by Late War German forces.   A Largely Unknown Feature of a Foreign Field Pitting South African troops against German Colonial forces, Matt Moran presents World War One in German South West Africa, complete with a scenario.   Project Showcase This month, our own esteemed editor Dan Faulconbridge shares with us his quest to create a Medieval retinue for the Lion Rampant rules: ‘The Disinherited’!    Greyhounds Against Wolves The Battle of Dogger Bank in January 1915 happened almost by accident. Roger Gerrish presents a brief account and suitable scenario designed to aid the wargamer who wishes to replicate the action on the tabletop.   Infra-red Night Hunters Wayne Turner presents an insight into how to use the new Infra-Red and Night Fighting rules in Nachtjäger.   Painting 1915 Phoenix Miniatures present a painting guide to some of the main forces in World War One.   Designer’s Notes: They don’t like it up ‘em! Neil Smith and Jim Graham present a chat amongst gentlemen, over port and cigars, regarding one of the recent releases by Warlord Games, the Black Powder supplement Blood On The Nile.   But not a man was lost – Gallipoli 1915 Jim Graham returns to take us through another signature part of the battles in 1915, focusing upon the evacuation of Allied forces. He also provides some ideas on how to run a scenario based upon the inherent dangers.   America’s First Vietnam Bob Giglio looks at a less well known colonial campaign; the American involvement in the Philippines in the 1890’s. He also presents a scenario based upon the excellent game he showcased at Historicon 2014.   The Battle of Long Tan Joe Krone provides details of one of the most famous battles fought by Australian troops during the Vietnam War. Plus a scenario for the re-fight.   Prowling Panthers An in-depth look at the new plastic model kits designed to be used with the Flames Of War rules.   The Battle of Dresden, 1813 Dave Taylor provides both words and pictures regarding this huge game that was presented at Fall-In 2014.   Modelling Tips and Tricks:  How to make a Wagon from Lolly/Popsicle sticks Malc Johnston and David Tuck tell us all we ever needed to know to make, build and paint an inexpensive wagon!   Warfare 2014 A show report combined with an interview this
If you are seeing this message after signing in, PLEASE PRESS THE BROWSER REFRESH BUTTON