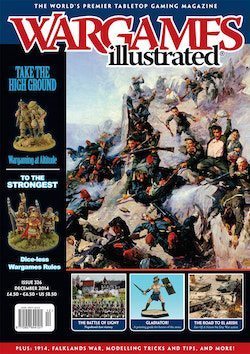 Take the High Ground In this month’s lead article, Pete Brown presents some thoughts on using hills in our gaming, and how they should/could fi t into any set of rules. The road to El Arish Another insight into the new Fate Of A Nation intelligence briefing for Flames Of War, the Battlefront Team present a battle report on parts of the attack on El Arish during the Arab-Israeli Six-Day War in 1967. Chariot Armies on Mountain Campaigns Once again, Nigel Stillman takes us back to ancient times and provides details on the campaigns undertaken by the Assyrians against the mountain tribes of the Caucasus Mountains, most notably Sargon II versus the Urartians. Gladiator! A painting Guide Matt Parkes shows us how to paint these warriors of the arena, demonstrating once again his award winning skills. Fog of War: What’s that Coming over the hill? In our latest ‘Fog of War’ game, Pete Brown and WI Sub-Editor Wayne find themselves advancing into unknown territory in a game which makes use of hilly terrain and two separate, but identical, tables. South Atlantic Showdown Roger Gerrish follows up his article on modern naval combat from WI324 with this ‘what if?’ scenario set during the Falklands War. The Fighting Koppie Bob Giglio presents an article and scenarios based around General Sir Garnet Wolseley’s assault upon Sekukhune’s Pedi tribal stronghold in November 1879. Rules Showcase: What’s the Strongest For this months Rules Showcase we roadtest a new (or possibly forthcoming, depending on progress!) set of Ancient rules, which do away with both dice and tapes. An Uphill Struggle Following on from our previous feature regarding the Battle of Keren 1941 terrain, created by James Morris and chums, James takes us through how to game the battle using two different World War Two rule sets: Bolt Action and Chain of Command. The Battle of Ligny: Napoleons Last victory Gary Kitching and friends continue to battle their way through the Hundred Days campaign. Their second battle sees French and Prussians clash across the tabletop in the precursor to Waterloo, and Napoleon’s last victory. Modelling Tricks and Tips: It’s a Brutte In his latest in the series, Nick Buxey discusses how to create terrain which is synonymous with the Wild West of both movies and reality. Shoot to Thrill: 1914 on the Western Front The Derby Wargames Club were invited to WI HQ to take part in a photo shoot for their ‘Early World War One’ game, as seen on the UK show circuit this year. Fighting talk: How much is too much? Barry Hilton returns with an insight into the trials and tribulations of publishing your own wargames rules
If you are seeing this message after signing in, PLEASE PRESS THE BROWSER REFRESH BUTTON