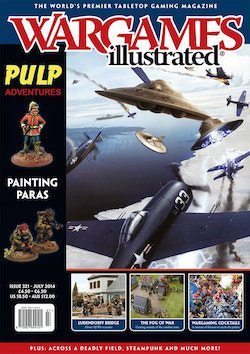 And now for Something Completely Different Roger Gerrish provides a primer for the world of Pulp gaming across a range of genres, so don your favourite headgear and gather your equipment as we invite you to embark on a journey into new realms of action and adventure!   The Battle for the Ludendorff Bridge The Battlefront Studio present a complete Flames Of War scenario and new missions detailing the fight for the Ludendorff bridge in the city of Remagen.   Cops Versus Robots A full and exclusive scenario and gaming statistics for Crooked Dice’s Pulp television-inspired 7TV rules, with fictional 1970’s heroes The Beat taking on unusual foes in an unremarkable corner of London.   Painting Paras Painting guru Paul Cubbins tell us how he paints British World War Two Paratroopers, showing us the techniques he uses to achieve his stunning results.   Top Secret! Pete Brown talks us through a blending of history and conspiracy theory to provide an insight into the world of Pulp Adventures after World War Two.   Scavenger Hunt True life Pulp-style adventuring is outlined in this article by Steve Dake and Dave Taylor. They focus on the actions of Napoleon’s forces in Egypt with regard to the discovery of the Rosetta Stone and the quest to acquire items of antiquity.   Sinbad and the Plaque of Destiny Our second offering from Crooked Dice comes in the form of a scenario and game stats for their 7TV game supplement 7TH Voyage. This time, we enter the realm of mythological and classic stop-motion animation movies as we see Sinbad and his companions battle the nefarious Kouran the Sorceror and the living statue of Kali!   Caesar’s Invasion of Britain 55-54BC Inspired by our recent Assault from the Sea theme, Nigel Stillman takes us through the trials, tribulations and gaming potential of Caesar’s invasions of Britain 55-54BC.   Building the great Zimbabwe Dave King, gifted amateur terrain creator, outlines the efforts he took in making his terrain board for his 2014 show game Allan Quatermain and the Lost City.   Rules Showcase: Across a Deadly field WI Sub-Editor Wayne Bollands and ‘Rulesmeister’ Mike Bradford are given the opportunity to play a Gettysburg scenario from this forthcoming Osprey ACW ruleset written by John Hill of Johnny Reb III fame.   Just what is Steampunk? In this theme-related interview James Griffiths of Infamy Miniatures outlines what Steampunk means to him.   Wargaming Cocktail Veteran correspondent Barry Hilton provides a report on a wargaming weekend spent re-fighting a range of battle scenarios from 1689 to 1702 using the Beneath the Lily Banners rules.   Fog of War: The Battle of Nelson Esteemed rulesmith Rick Priestley finds himself with a
If you are seeing this message after signing in, PLEASE PRESS THE BROWSER REFRESH BUTTON