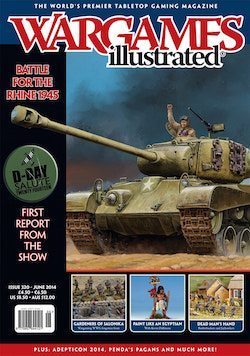 Hell’s Crossroads To celebrate the release of the new Flames Of War Bridge at Remagen Intelligence Handbook, the guys from the Battlefront Studio report on a US and German armoured forces clash in the Ruhr.   The Rolling Hills of Arklow The Master Builder behind the Wargames Illustrated 2014 show table – Nick Buxey – talks us through the construction of this wonderful 12′ x 6′ board.   America’s Battle Tank With the release of the new Flames Of War Pershing plastic kit, the Battlefront Studio take a look at this iconic World War Two tank, in history and in the game.   Bautzen, 1813 Barry Hilton reports on a ‘League of Augsburg’ weekender in which players used Republic to Empire to play out the Napoleonic Battle of Bautzen, 1813.   Dead Man’s Hand ACW Following on from last month’s article – Under the Black Flag – we present a three scene scenario for Dead Man’s Hand using some new rules for incorporating American Civil War guerillas into the game. You will find cards for these new ‘gangs’ on the back of the magazine.   Salute 2014 The biggest show in the European wargaming calendar has been and gone for another year, but don’t worry if you either missed it, or would like to see some of the games at the event again, because this report showcases some of the best tables from the show, and compiles the news from some of the biggest manufacturers regarding their 2014 releases.   Warbands and Shieldwalls Author and rules writer Chris Peers introduces us to the army of the last of the Pagan Saxon kings – Penda of Mercia.   Painting the Egyptian Standard Bearer In the last issue we had sculptor Steve Salah talk us through the process of sculpting a fi gure, namely, an Egyptian Standard Bearer . This month Kev Dallimore bookends the fi gure’s journey to the tabletop, by showing us how he painted it.   Once Upon a Time In Chicago: Beer Wars We continue our investication of skirmish wargaming with American gangsters, by turning our attention to the North Side and South Side battle for supremacy of 1920 -1929, a confl ict which brought Al Capone, and Prohibition, to the fore.   Adepticon 2014 We report on the historical goings-on at this major US gaming convention.   The Battle of Raphia, 217BC A report from one of the participants on a massive refight of this well known ancient battle between Ptolemy IV’s Egyptians and Antiochus III’s Seleucids.   The Gardeners of Salonika Away from the mud and blood of the Western Front, the forces of the Central Powers and the Entente were fighting almost another war in the rugged
If you are seeing this message after signing in, PLEASE PRESS THE BROWSER REFRESH BUTTON