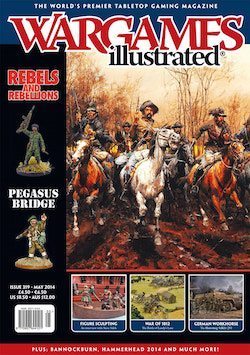 A PROPER GAME OF THRONES We begin this month’s theme content with the last battle of the Wars of the Roses. York and Lancaster clash in the green fields of Nottinghamshire, and on the tabletops of the Abingdon Wargames Club, as they refight this medieval slugfest, with the Yorkists attempting to change the course of history. THE NATURE OF THE GAME: An interview with steve saleh WI were given the opportunity to spend some time talking to top North Star sculptor and artist Steve Saleh about his life, work and upcoming projects. THE BATTLE OF ARKLOW 1798 The Wargames Illustrated 2014 Salute and HISTORICON demo table comes to life in this refight of one of the largest battles of the Irish rebel uprising of 1798. Over 1,000 miniature pikemen attempt to storm the barricades and win the game. THE GERMAN WORKHORSE Mention German halftracks to anyone and they instantly think of the Hanomag SdKfz 251. Members of the Battlefront studio team take us through the new plastic Flames Of War kit with its variety of options. UNDER THE BLACK FLAG The American Civil War provided an opportunity for unprecedented lawlessness in the border states between north and south. Bushwackers, Jayhawkers and Redlegs roamed the country bringing their own brand of guerilla warfare to the conflict. In this article, Nick Buxey provides us with background information on, and wargame ideas for, these ACW miscreants. THE BATTLE THAT SAVED A NATION? Kaleb Dissinger and Nathan Gerstner provide a report on the 250th Anniversary celebrations of the Battle of Bushy Run, which took place during the Native American uprising known as Pontiac’s War. PAINTING CHE GUEVARA Every year, we give away a free figure with every copy of Wargames Illustrated we sell at Salute and HISTORICON. Our free figure for 2014 is freedom fighter/terrorist Che Guevara. This article provides a step-by-step guide to painting this famous Argentinian rebelde. PEGASUS BRIDGE Making use of the Ham and Jam collector’s edition of the popular Pegasus Bridge boxed set, WI was on hand to provide photographic evidence for this full battle report of a tense and exciting game played at Warlord Games HQ by Rick Priestley and Alessio Cavatore. BRINGING THE BATTLE TO LIFE In March of this year the nine million pound Bannockburn Visitors Centre, Stirling, opened its door, and WI were invited along to take part in their new ‘Battlegame’. BRIDGE AT REMAGEN Mike Haught and Dr. Michael L. McSwiney provide an insight into the latest supplement for Flames Of War, which details the hard-fought battle to secure the Ludendorff Bridge between elements of the US 9th Armored Division and the German defenders led by Major Hans Scheller. THE BATTLE OF LUNDY’S LANE
If you are seeing this message after signing in, PLEASE PRESS THE BROWSER REFRESH BUTTON