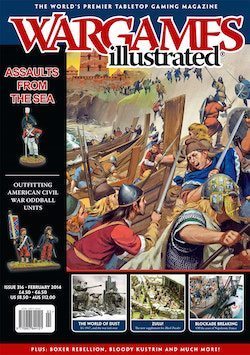 Godwine’s Great Gamble Our multi-period theme content begins in the Dark Ages with some Saxon-on-Saxon longship raiding, pillaging and burning action, from the pen (or rather keyboard) of Early Medieval expert Dr. Ryan Lavelle.   Welcome to the world of Dust In an alternative 1940s reality, alien technology fuels gigantic machines of war as the forces of the Axis and Allies clash over rare mineral deposits that will decide the outcome of the war.   “The Turks are Coming!!” Most pirate games centre on action in the Caribbean and across the Spanish Main, however our second Assaults from the Sea article has an altogether different (although totally factual) spin on regular pirating.   Thoughts on a ‘One-Sided’ War – Zulu! Jim Graham and Neil Smith chat back and forth about their thoughts while planning and writing Warlord Games’ latest Black Powder supplement – Zulu!   Breaking the Blockade of Brest We travel to the coast of France for our next theme article and present a Napoleonic naval battle which is as much a joy to behold as it was a unique experience to take part in.   Outfitting: American Civil War Special Units Don Effi nger and Mike Evans conclude their series on the uniforms and equipment of the American Civil War with this look at a handful of the more outlandishly attired regiments.   Adcocks Funnies We couldn’t do an issue about Assaults From the Sea without talking about D-Day, and Battlefront modelmaker Tim Adcock just had to pay tribute to the efforts of Major General Percy Hobart and convert a few Flames Of War tanks into iconic ‘Hobart’s Funnies’.   No Retreat! The World War II Soviet offensive to drive across the Oder River and on to Berlin hit a stumbling block when the Russians encountered stiff German resistance at Kustrin. Dr. Michael L. McSwiney describes the background and presents a scenario for re-fighting this bloody battle.   A Firebell in the Night A Steve Dake gives us a somewhat unorthodox review of A Firebell In The Night, the latest set of ACW rules from Dale Wood and Tod Kershner, sprinkled with a dose of battle report.   Savage Wars of Peace – Part 7 Our series of articles on the ‘Small Wars’ of Queen Victoria’s Britain draws to a close with this look at the colorful, yet rarely gamed, Boxer Rebellion of 1900.   Warfare show Report Paul Davies reports from one of the closing shows in the UK wargaming calender.   Fighting Talk!: Carved In Stone Guest columnist Pete Brown questions some accepted wargaming rules ‘facts’.
If you are seeing this message after signing in, PLEASE PRESS THE BROWSER REFRESH BUTTON