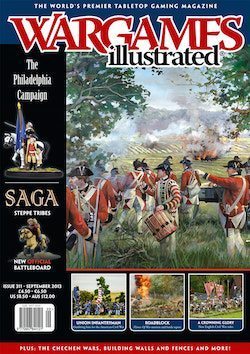 Winning hearts & minds Regular contributor Neil Smith takes us on a journey from Boston in 1775 to Philadelphia in 1777, tracing the steps of two armies at odds with each other in many ways. This sets the scene for our other theme articles.   Roadblocks The Roadblock mission was one of those omitted from version III of the Flames Of War rulebook. It makes for an interesting and fun game, but wasn’t always the best choice for tournament play. This article looks at some historical examples of the types of battles the Roadblock mission represents, introduces an updated Version III Flames Of War mission, and takes you through a couple of brief examples of games.   The battle of Brandywine We are guided through this important battle by Joe Krone, who then provides us with a Black Powder scenario. Our UK Editor refought this battle with Rick Priestley, both jotted down their thoughts on the game.   Welcome to hell Using the Force on Force rules, the guys from the Grimsby Wargames Society have been playing some scenarios from the First Chechen War. In this article they tell us all about their Welcome to Hell project.   “Have at the Bloodhounds” We managed to convince Essex Gamester Ron Ringrose to host this refi ght of the Battle of Germantown in his “wargames shack”, and he certainly obliged with a massive (and beautiful) table and glorious armies as well. Joe Dever was on hand to record the battle for our photographic exposition.   A crowning glory David Bickley tell us about his new English Civil War rules, and presents a scenario.   How To Build… Fences & Walls Wargamer and blogger Pat Smith has been making brilliant terrain for years. Here is his first terrain-making article for us, all about the wooden fences and dry-stacked stone walls that were iconic of the late 18th Century landscape around Philadelphia.   Outfitting … The Union Infantryman The first in a new series designed to give wargamers new to the American Civil War a solid foundation in the uniforms, equipment, and general appearance of the soldiers that they’ll be painting up. ACW experts Don Effinger and Mike Evans provide great information, based on decades of research, on how the bulk of the Union infantrymen would have looked as they marched to their next battle.   Mind over matter With limited weapons and little training the Finns destroyed incredible numbers of Red Army tanks during the Winter War. This article examines the Finns’ anti-tank tactics.   Steppe tribes Saga author Alex Buchel introduces a new faction into his rules. Look out for the accompanying Battleboard on the back cover!   Evolution of the
If you are seeing this message after signing in, PLEASE PRESS THE BROWSER REFRESH BUTTON