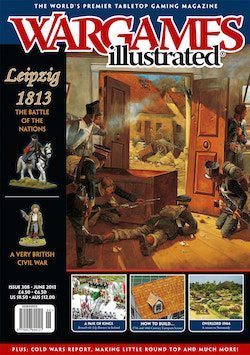 The lament for an empireAfter suffering through the disastrous 1812 campaign in Russia, Napoleon had struggled to bring his Grand Armée back up to strength. Despite his army’s lack of experience and horses, Napoleon’s enemies still did not underestimate his ability in the field. It took until October 1813 before the Sixth Coalition could force him into a battle of their choosing, one that would become known as the Battle of the Nations. Neil Smith presents the build-up to the battle, along with its aftermath. Overlord. Return to NormandyBattlefront Studio team members Phil, Wayne, and Mike talk us through the new Flames Of War compilation books: Overlord and Atlantik Wall. Victory in defeatAge of Eagles author Col. Bill Gray (ret.) gives us his thoughts on the Battle of Mockern, fought north of Leipzig on 16 October 1813. He also gives us extensive Orders of Battle for the forces involved. Albion in perilThe popularity of A Very British Civil War has certainly grown over the last four years and one of the genre’s founders, Simon Douglas, gives us a bit of a look at the current “state of play” with this alternative history story that has developed and evolved as the enthusiastic VBCW community keeps driving things forward. Let’s refight LeipzigDavid Brown gives us a photographic recap of all the 15mm General De Brigade action as he and 28 others fought their way through the Battle of Leipzig last year at the Wargames Holiday Centre in Basingstoke, UK. Panic in the jungleWith the enemy coming at them in attack waves from all directions, the players have to cope with a tidal wave of death in this Tour Of Duty co-operative game, which actually contains many great ideas for usein any co-op wargame How to build… 17 – 18C. European housesOur almost-resident model builder Paul Davies has a different take on building European houses perfect for representing the towns around Leipzig, Germany. He has created three downloadable plans for creating 10mm scale houses in card stock. We show you how to scale these plans up for your 28mm gaming too. The making of little round topDavid Marshall, of TM Terrain, talks us through the building of this year’s Wargames Illustrated show circuit table. Dreamers and pragmatistsPhil Yates, Lead Games Designer for Battlefront Miniatures, talks us through this latest installment of our Evolution of the Tank series. He gives us a look at the race to develop a fi ghting doctrine to go alongside the wide array of tanks available, and how these doctrines influenced the major nations involved in WW2. Checkpoint pastaGrimsby Wargames Club chairman David Tuck tells us about his club’s recent ‘Italians in Mogadishu’ game. A pair of kingsBarry
If you are seeing this message after signing in, PLEASE PRESS THE BROWSER REFRESH BUTTON