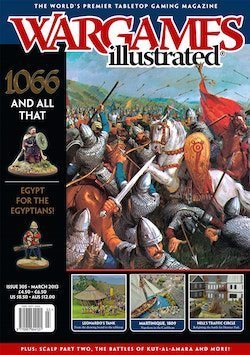 1066, Hastings   We begin our theme content with a battle report on Hastings – Touchstone for the Conquest. Paul Kerrison of Kallistra and friends gathered around a 12′ wargames table and played out a 10mm refi ght ofthe battle, with the Saxons attempting to change the course of history and keep Harold Godwinsson on the throne of England. Hell’s traffic Circle Following on from last month’s Hunner Park article, Battlefront Studio Team members Mike and Sean take to the streets of Holland with their SS and Grenadier Guard battalions to refi ght this scenario from the new Flames Of War Market Garden compilation books. 1069: The Norman yoke The year is 1069 and post-conquest England is ablaze with insurrection as the Anglos-Saxons and their allies rise in rebellion against their new Norman lords. In this mini-campaign we follow the fortunes of the ‘Rebel Alliance’ as they battle through Saga and Hail Caesar games in an attempt to topple William the  Bastard from his throne. A design before its time       Our Evolution of the Tank series continues with Pat Ohta’s step-by-step guide to assembling your very own version of the “tank” designed by Leonardo Da Vinci. Scalp! part two Tim Eagling concludes his French & Indian Wars campaign with the second, third, and fourth scenarios. Additionally Tim discusses the miniatures and scenery he used throughout the fi ctional Swallowtail Valley.  The battles of Kut-al-Amara, 1915-16 Ralph Krebs follows our recent WWI revelations with this scenario set in the town of Kut-al-Amara, just as the British forces are attempting to withdraw. The Turks and Germans are hot on their heels. A third tour in Vietnam In 2009 Wargames Illustrated brought the Flames Of War game to the Vietnam era with some rules and fi gures set around the Battle of Ia Drang. This month Battlefront release Tour Of Duty, a 132-page book (in      full colour) filled with history, intelligence briefi ngs, and special rules. Here we talk to the designers.  Martinique 1809 The latest ‘big bash’ from Essex megawargamer Ron Ringrose sees The French taking on the British in the Caribbean during the Napoleonic Wars. “Egypt for the Egyptians” The last time the British army wore red coats was in the Anglo-Egyptian War of 1882. A few years later the Egyptians were fighting for the British against the Mahdi, but in this Victorian ‘little war’ the Egypians were fighting to establish their own anti-British government. Peter Keeling offers some ideas for wargaing the conflict. There and back again Steve MacLauchlan (of the WWPD website and podcast) paid a visit to the Battlefront New Zealand studio and tells us about the week he spent as a guest of
If you are seeing this message after signing in, PLEASE PRESS THE BROWSER REFRESH BUTTON