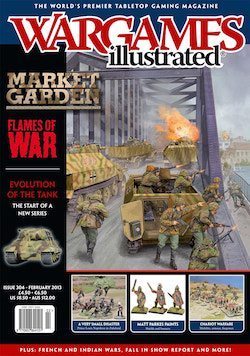 Where’s my Kampfgruppe? When Flames Of War games designer Mike Haught wrote the Market Garden books; Hell’s Highway and A Bridge Too Far, he created a battlegroup that could cover as many possible angles in one company diagram as possible, in this article Mike gets more specific, highlighting various battlegroups which can be fielded from the existing company diagrams.   A Very small disaster As the British found out in Zululand in 1879, it’s not a great idea to take the last in line to the French Imperial throne along on campaign as a casual observer. One hundred and thirty three years after Prince Louis Napoleon’s death at the hands of the Zulus the Wyvern Wargames Club take us through their participation game based on his ill-fated holiday in South Africa.   A walk in the park Hunner Park lies just south of the strategically situated town of Nijmegen in The Netherlands. During the WWII Market Garden operation it became a key battleground as the Allies pushed forward towards German. This Flames Of War scenario pits the Grenadier Guards against the defending and entrenched SSSperrverband Euling.   Command combat: Civil war Jeff McArthur, author of the game Command Combat: Civil War, takes us through the ideas behind his game, telling us a bit more about how it all developed.   Battlefields of The Netherlands Far from being flat and featureless, the Dutch landscape is crossed by canals, soggy polder and raised roads, while other areas are built up into large cities. In this article we’ll talk about how to recreate these unique battlefields on your tabletop.   Scalp! part one Tim Eagling provides us with the backdrop for a nice little French & Indian Wars campaign. Our first article includes a scenario covering a raid on a logging party.   Raising roads Following on from our Battlefields of The Netherlands article, Casey Davies shows us how to create one of the key features of the Dutch countryside – raised roads.   Evolution of the tank This is the introductory article for our new series on the development of the almighty tank. Jerry Biolchini starts us off by explaining a bit more about what a tank truly is and looking at the elements that must be considered along the way.   Chariots In our second “Evolution” article, veteran wargamer and historian Nigel Stillman takes a look at the idea that perhaps chariots were the original tanks of their day. Presenting three different narratives, Nigel gives us plenty of food for thought..   Matt Parkes paints: Shields and Banners In the last in this current series of Matt Parkes Paints, Matt shows us some tricks and tips for applying different types of decals and
If you are seeing this message after signing in, PLEASE PRESS THE BROWSER REFRESH BUTTON