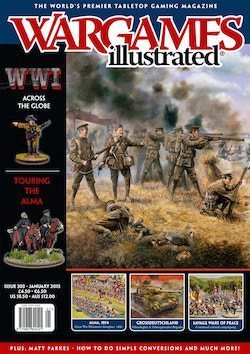 Wargaming World War One We introduce this month’s theme with an article that looks beyond the stalemate of World War One on the Western Front and sells the concept of gaming the confl ict on a global scale.   Grossdeutschland Battlefront studio writers Wayne Turner and Phil Yates provide us with background and Flames Of War army lists for Hitler’s Führerbegleit and Führergrenadier Brigades during WWII.   MONS 1914. Part One Looking for a World War One gaming project that avoided the attrition of trench warfare, Tim Whitworth and the guys from the ‘Like a Stonewall’ Wargames Group decided to tackle Mons for their 2012 show circuit demo game. In this article Tim describes the project for concept to reality.   Touring the Alma Dave Andrews and Aly Morrison have been slowly building their Crimean War range in a chronological fashion. Once they had all the troops required for a slice of the Battle of the Alma they put together this wonderful table to travel around to wargames shows with. Dave gives us a closer look at this great gaming display.   “Brimming with action and big with fate” The first Great War action of a young Australia saw their troops in a raid against German possessions in the South Pacific. This article follows the Australian Naval and Military Expeditionary Force as it attempts to wrest the island of New Britain from German control.   The Kittanning Raid Brad Pflugh and Bill Starmer bring us another exciting article from the French and Indian Wars. This time the tables are turned as the Pennsylvania Provincials launch a raid on the native village of Kittanning, all set to rescue captives and extract a measure of revenge.   The battle of Solstice 1918 We open up the Italian Front to some wargaming action in this article, as we introduce gaming ideas for Austro- Hungary’s fi nal assault against the Italians.   Matt Parkes Paints: Conversions As we rapidly approach the conclusion of our Matt Parkes Paints series we find Matt and a few of his colleagues providing some great information on converting your miniatures. From head swaps to sculpting   luggage, you really should take a look. Savage Wars of Peace –Part three Andy Hoare provides us with some new ideas on developing your heroes (or heroines) and villains in the Savage Wars campaign, as well as taking a look at the First Sikh War and providing us with a Black Powder scenario for the War.   Presenting Wargaming To The Public! Steve Dake and Don Nelson give us a few things to think about when they recount the story of running a demonstration wargame at their local library.   A very
If you are seeing this message after signing in, PLEASE PRESS THE BROWSER REFRESH BUTTON