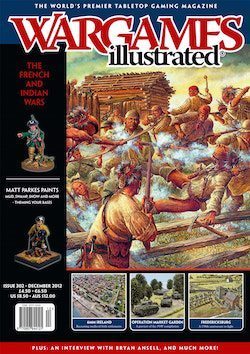 War in the wilderness In our first article for this month’s theme, Neil Smith and Chris Peers introduce us to the history and guide us through the practical information required for bringing an F&IW force to bear on the tabletop.   Operation market garden Battlefront writer Mike Haught previews the forthcoming Operation Market Garden compilation for Flames Of War.   Dried corn and swampfoot In this article Rich Jones tells us about his ‘slip’ into F&IW gaming, followed by a walk through of a Muskets & Tomahawks battle, featuring the iconic Rogers Rangers.   Creating Fredricksburg Long-time games master and ACW aficionado Bill Moreno talks us through the creation of his Battle of Fredericksburg table in this, the month of the 150th anniversary of the battle.   Decorating the wilderness What should a French and Indian Wars tabletop look like? With the help of Grand Manner buildings Neil Smith educates us on how to tell our wikiups from our wigwams in order to bring accurate F&IW scenery to the miniature battlefield.   Mr Polk’s army Doug Biggs is back with his look at the U.S. Army of the Mexican-American War, including suggested stats and special rules for using them in games of Black Powder.   How to … build an Indian Longhouse Paul Davies shows us how to make a Native American Longhouse.   The Satsuma rebellion The last in our trilogy of articles which tells the tale of the rise of Imperial Japan. In his final piece Kevin Jones presents the background to the last of the samurai insurrections – The Satsuma Rebellion – and provides a scenario for re-fighting one of its battles – Tabaruzaka, 1877.   6mm Ireland Colin Patten reveals several marvellous 6mm displays he has been working on for the Waterford Museum in Ireland.   2012 U.S. Flames of war nationals Joe Krone gives us a look at the three North American Flames Of War ‘Nationals’ events run during 2012. See the best looking armies, as well as the winners from the Iron Cross Painting Competition.   Walk a mile in their Moccasins Dr Joe Legan takes a look at the types of folks who partake in our great hobby, and asks if we can’t all get along?   Savage Wars of Peace – Part two In this installment of Andy Hoare’s campaign of derring-do through the Small Wars of Queen Victoria, we are presented with ideas that see your characters bringing their followers along with them into the thick of battle. Also included is a look at, and scenario for, the First Afghan War.   Matt Parkes Paints: Basing Part two – theming Following on from his “groundwork” introduction to basing in our
If you are seeing this message after signing in, PLEASE PRESS THE BROWSER REFRESH BUTTON